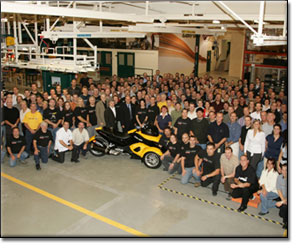 Today marked the beginning of a new era for BRP as its first on-road vehicle, the 2008 Can-Am™ Spyder™ roadster, rolled off the assembly line in Valcourt, Québec.

A three-wheel vehicle (two in the front, one in the rear), the Spyder roadster offers the performance of a traditional motorcycle with much of the peace-of-mind of a convertible sports car. It is powered by a Rotax® 990 V-Twin engine, produced by BRP Rotax, the company’s Austrian division and a world leader in engine development.

“This is a very important day in the history of BRP,” said José Boisjoli, president and CEO, BRP. “Our employees around the world have a lot to be proud of as we bring to the market a product that is a true paradigm shift, a completely new and unique vehicle, one that will redefine the roadster category. The Can-Am Spyder roadster is yet another testimony of BRP’s passion for innovation and for the powersports industry,” he added.

The February 2007 launch was followed by a targeted marketing campaign in both North America and Europe, which gave potential clients the opportunity to ride the new roadster.

“Since its official unveiling, the Spyder roadster has been a hot topic among powersports enthusiasts, open-road newcomers and media alike the world over. To date, more than 20,000 consumers have tried the Can-Am Spyder roadster in 11 American states, four Canadian provinces and eight European countries,” concluded Boisjoli.

The first units will be delivered to selected dealerships across North America in October while dealers in International markets will receive theirs at the beginning of 2008.

In 2008, BRP will pursue its go-to-market strategy and deploy the Can-Am Spyder roadster to approximately 20 additional American states, a few other Canadian provinces and 15 countries in Europe, South America, Asia Pacific and the Middle East. The roadster’s worldwide deployment should be completed within the next two to three years.

The first Spyder roadster to roll off the Valcourt assembly line will be delivered to Jay Leno, a well-known collector and restorer of era-defining cars and motorcycles, columnist in Popular Mechanics Magazine, and host of the iconic U.S. television programme The Tonight Show.