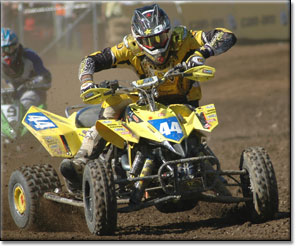 The final round of the WPSA 10 round series was held amongst the gentle rolling hills of Boswell, PA. Cool temperatures and a brisk breeze made for a refreshing if not chilly weekend at Field of Dreams Motocross Park.

As Team Rockstar / MSR / Suzuki / Yoshimura / Pro Taper came into the weekend, Suzuki had already dominated the Manufacturer’s Cup so much that they just had to basically show up with one quad on the starting line.

The series individual riders championship, however, was another story with Suzuki being 11 points down on Friday. Even though the team had won half of the races of the year, there were still enough points outstanding to threaten an overall win by the team points leader – Dustin Wimmer.

As the heat races commenced on Saturday, a couple of races put Dustin within 9 points by the end of the day, but only a wing and a prayer could give him top honors.

Sunday was a day of waiting. With both sets of heat races run on Saturday, there was little to do but practice, strategize and try and relax.

At the start of the main, Natalie grabbed the holeshot with Wimmer and Wienen running three and four behind him. Both moved up a notch by overtaking 2nd place Creamer. Wienen then charged ahead of Wimmer and was suddenly on the heels of John Natalie. This lasted for a couple of laps until Chad finally edged him out in a tight turn on the white flag lap. At the checkers, it was Wienen, Natalie and then Wimmer.

“It was tough to catch Natalie when he had such a strong start,” Wienen said after the race. “But every race I’m in, I never give up and was able to finally pass him on the last lap for the win. I wanted to end up the series with the most wins (5) and I did it.”

Suzuki’s Rod Lopusnak was happy with the day’s win and of course with the coveted Manufacturer’s Cup. “This is the second year in a row that most races that have been won were on a Suzuki, and we’re really proud of that. This really demonstrates how good the bike is and the kind of commitment that Suzuki has made to the sport of ATV racing.”

Lopusnak went on to comment about 2008. “We’re really excited about coming back with three of the top riders in the country. Doug Gust, Dustin Wimmer and Chad Wienen are going to be tough to beat. With the new 2008 QuadRacer R450 and this incredible combination of riders, it’s going to be an exciting year ahead for Suzuki and Team Rockstar/MSR/Suzuki/Yoshimura/Pro Taper.”