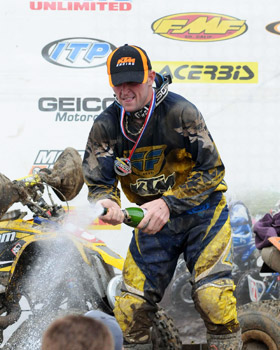 FRE/KTMs Taylor Kiser finished 2nd overall at the eleventh round of the ATV GNCC Series at the Unadilla Valley Raceway over the weekend.

The rain in the days leading up to the race and the steady rainfall on race day made for quite a few muddy sections on the race course. However, Kiser explained the course in a different manner, “The course was strange. It was muddy in sections because of the rain, but because that was the first rainfall in quite some time, there were other sections of the track that were dry and dusty. The variation in the track conditions made the track very rough and challenging – just how I like it!”

Kiser’s teammate, Adam McGill, was out front early with a great start, while Kiser described his start in one word, “Horrible!” Kiser had been pushed back toward the end of the pack and then spun out and crashed together with competitor Chris Borich in the third turn. Fortunately, the two quickly recovered and began their charge forward.

Meanwhile, out front, McGill and the rest of the top five took a wrong turn a couple miles into the course which caused them to back track about one mile, allowing many riders to get by. “The front pack taking a wrong turn and my advantage of walking the first mile and a half of the course earlier in the day helped me to pass quite a few riders on the first lap,” commented Kiser who came around in 3rd place after lap one. McGill would check in at 19th on lap one after struggling to make up time from his earlier detour.

Kiser continued to ride a strong and smooth race through to the finish. He was holding on to 3rd on the last lap when Bill Ballance wrecked in front of him while trying to pass for the lead. Kiser capitalized on his mistake and finished in second position just 25 seconds back from the winner Chris Bithell. McGill, who rode a great race, despite his first lap bad luck, would catch back up to 11th before the checkered flag flew.

On the podium, Kiser mentioned, “I am so happy with my performance today. My bike ran great and I had a mistake free race. I hope to finish in the same way the last two rounds.”