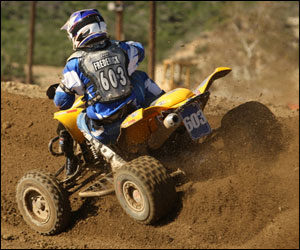 Round one of the ITP Quadcross series was held in conjunction with the AMA/ATVA National at Glen Helen Raceway near San Bernardino, Calif., this past weekend.

BRP’s latest was also the ATV of choice for several other DS 450 racers in the amateur classes.

“It was a great weekend of racing for BRP Can-Am,” said Del Bohlman, Product, Media Relation and Racing Manager for Can-Am ATVs. “Josh Fredericks has quickly begun to distinguish himself in the ATV racing world and we are extremely pleased with his performance and the rest of the Team Motoworks racers and crew.”

In the amateur classes, Team Motoworks/Can-Am racer Dillon Zimmerman put on a great second-moto and took the win in the Four-Stroke Expert class.

With Zimmerman’s first race result, he finished second overall for the weekend.

The entire Motoworks/Can-Am team will make the trip to Arizona Cycle Park, near Buckeye, Ariz., on April 13.