Gold and Lots of Silver for Arctic Cat 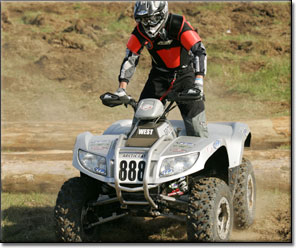 After winning the 2006 World Powersports Association (WPSA) Quad Terrain Championship, Arctic Cat vowed to return stronger than ever for the 2007 season.

That is exactly what they did in the Reynolds, Georgia opener; posting impressive 1-2 results proving performance and durability are king.

“Not only did our Factory supported teams do well, but it was encouraging to see other independent Arctic Cat riders compete,” stated Wainer.

West stated, “My Arctic Cat is seriously competitive. In the near future, look for my brother Josh and I to be standing on the podium side by side.”

For more information on Arctic Cat ATV racing and its 2007 Contingency program, please log on to www.arcticcat.com.

Dirt Trax Onlinehttps://www.atvmag.com
Check back frequently for new content and follow us on social media!
Previous articleStarter Problems On ’99 Polaris
Next articleAny Thoughts On Helmet Cams?