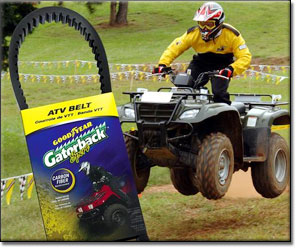 Goodyear Engineered Products is hitting the trail with a “self-healing” carbon-fiber-loaded ATV drive belt that can reduce the possibility of a long walk home.

“Threadlike strands of carbon fiber are strong and flexible and weigh much less than steel of similar strength,” said Danhauer. “The fiber alignment in the rubber compound provides added stiffness across the width of the belt.”

Jonathan Cocco, marketing manager for Goodyear aftermarket products, said a Goodyear survey of quad riders shows they want precise, immediate throttle response and off-road durability whether for hunters, ranchers, fire rescue teams or sport enthusiasts. A CVT system varies the working ratio of two v-shaped pulleys linked by the belt, said Cocco. The distance between pulley flanges can fluctuate, allowing the belt to ride smoothly up or down the pulley, continuously changing the gear ratio and varying vehicle speeds. The pulleys are part of a power sensing drive that increases tension during acceleration and lowers tension when power is reduced.

Danhauer explained that conventional CVT belt sidewalls can glaze and char from heat buildup when engaged with pulleys under extreme loads. Materials from the top width of the belt then turn down and inward, creating vibrations that can quickly destroy the belt.

Goodyear’s new Gatorback Sport ATV drive belt is the first CVT belt with carbon fiber reinforcement in its rubber compound. When handling an extreme load demand, the carbon fiber allows desired slippage on pulleys without top-width belt distortion. After the extreme demand subsides, the carbon material restores the integrity of belt edges in order to handle the normal load demand.

Goodyear quickly responded by mixing carbon fiber reinforcement in rubber compounds for the new timing belt. The result was an advanced composite that withstood the increased loads and higher temperatures, allowed engines to run more efficiently, and provided precision timing in a very harsh environment.

“Buoyed by our success with carbon fiber, we went to work on the CVT belt for allterrain vehicles,” said Cocco. “Its performance earns it the Gatorback name, joining a growing family of popular Gatorback automotive belts that are used by all major NASCAR Cup Series teams and are available in auto part stores and service centers.”

While Gatorback Sport’s lateral strength comes from carbon fiber, its longitudinal strength comes from Goodyear Flexten aramid cords traveling the circumference of the belt. Flexten minimizes stretch, stabilizes overall length and maximizes horsepower transmission. “It adds up to predictable tension performance,” said Danhauer, “and tension is as important to belts as air pressure is to tires.”

For additional information, go to goodyearbeltsandhose.com.

Dirt Trax Onlinehttps://www.atvmag.com
Check back frequently for new content and follow us on social media!
Previous articleCan-Am Outlander or Polaris X2
Next articleSafety is the Parent’s Responsibility