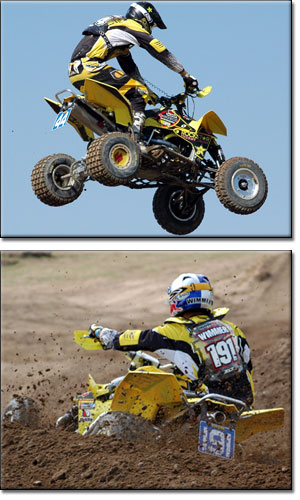 The opening round of the 2007 WPSA SuperQuad Pro 450 Series got off to a great start for Team Rockstar/MSR/Pro Taper/Suzuki/Yoshimura. A new Rockstar awning and Tucker Rocky Hospitality Center were quickly set up under beautiful blue skies at the Silver Dollar Race Track in Reynolds, GA.

The track had been dormant for years, but the WPSA crew got the it back up to speed in no time and the facility turned out to be very raceable as well as challenging. With the dry weather the sand/clay base featured good traction and the corners had multiple lines.

Rick Murphy and the rest of the folks at WPSA had prepared for a bumper crop of riders and they got it. Over 450 entries and a record number – 39 – Pros showed up to support the first event of the series that will be broadcast on ESPN-2 in June.

This was the first race with newcomer Chad “Wide Open” Wienen aboard a QuadRacer® R450. He had been busy all week with his mechanic Ryan Cox getting his new bike set up and getting used to the idea of being a “factory rider.”

In the first group of qualifying races on Saturday, the team did very well. Wienen was ready to prove his mettle with the other two members of the Triple Threat Suzuki squad. He’d only had a couple of days on the finished bike and his lap times had been smokin’ hot. It was showtime.

The format was to have two split field qualifying races on Saturday and then the same on Sunday morning. In the WPSA series, even the qualifying heats carry points that total in. Chad was paired with teammate Doug Gust, and Dustin Wimmer was running his heat solo. Although Doug had first gate pick, he still trailed Natalie for the holeshot and came in third behind Wienen. In the second heat, Wimmer made a bullet line to the first turn for the holeshot and walked away from the pack for an easy win.

Sunday’s first qualifier pitted Gust against Natalie again, with “The Digger” getting the holeshot and never looking back. Doug had some really good lines through the whoops sections and that helped him increase his lead. The second qualifier had both Wimmer and Wienen going for the win.

Wienen had tangled up with another rider at the start and took off close to the back of the pack. But the end of lap one Wienen was fourth, by the end of two laps Wienen was second. Passing riders does not seem to be much of problem for Wide Open Wienen. At the checkers, Chad held a couple of seconds lead and he, Dustin and Natalie all were tied for points.

Finally, the main event was ready to go and at gate drop it was Natalie, Wienen and Gust and so it stayed for seven laps. Chad Wienen was blazing fast and was closing in on Natalie when his bike stalled due to a suspected case of boiling gas.

Although he was able to get going again after a moment or two, the race for the win was over for Wienen. Wimmer came up from behind and eventually passed Goodman for third.

“The QuadRacer was going really fast and I was really gaining on Natalie, “Wienen said after the race. “I’d gotten one of my best starts ever, too. Even though I didn’t win, I think we went out and showcased what we can do. I’ll be ready for Taylorville.”

With Wienen out of the running it was up to Doug and Dustin to move into the lead. They really pushed the bikes but Natalie had about a ten second lead that they couldn’t overcome and had to settle for second and third place.

“All in all, I had a good weekend,” Doug said. “The Suzuki QuadRacer R450 really worked well and the team has been really working hard to get it dialed in right. I’ve been working hard on my starts and it really showed today.”

Wimmer was philosophical about the weekend, “Overall, I came out of the weekend with a heat win, and a lot of points. I’m not happy with Sunday’s results, but I know I have the speed and endurance to win and that’s what I intend to do this season…a lot.”

The trio has a couple of weeks off to strategize for their next assault at Taylorsville, IL on May 12th.

Dirt Trax Onlinehttps://www.atvmag.com
Check back frequently for new content and follow us on social media!
Previous articleEATING CROW ON THE 800 OUTLANDER
Next articleGold and Lots of Silver for Arctic Cat