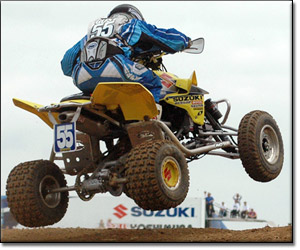 Bowling Green, KY – The skies were threatening and stormy both Friday and Saturday with the remains of Hurricane Ernesto thrashing the northeast. Even more ominous was the impending clash between the two contenders for the GNC Championship Pro title.

For 13 rounds, Doug Gust and Joe Byrd had traded off enough wins that it came down to Sunday’s outcome. It was Team Yoshimura Suzuki’s last chance to grab the GNC Championship Pro title for 2006.

Going into the weekend, Doug Gust was only 15 points down from leader Joe Byrd. He was coming on strong having just cinched the WPSA SuperQuad Pro 450 title two weeks earlier.

With some luck, Doug Gust could walk away from 2006 with two titles. It was doable. For Doug to have a chance at the GNC Championship, he would have to take the overall and Joe come in no better than 7th.

The track was well designed, wide, and very fast. Not too technical, but with a lot of whoops, jumps, lines and ample room to pass. Riders felt the track was a bit of a “freeway,” but overall liked the venue.

The event was very well run and most agreed, was one of the best tracks of the year. By early afternoon, the skies had cleared and the sun shown down on the verdant Kentucky hills. It was time to race.

The first moto started with Doug grabbing the holeshot and Joe Byrd rounding the first turn around 10th place. Doug was blazing fast and only had Dustin Wimmer as any kind of threat during most of the race.

As the laps went down, Gust moved to a comfortable lead, however Byrd started to move through the pack and finished two places behind Doug as the checkers flew.

The second moto found Doug trailing Harold Goodman at the first turn with Byrd in 6th place. Gust dropped back to third as Natalie passed him and then drifted to fourth behind Lawson. Byrd was now on Doug’s tail.

At the halfway point Goodman and Natalie had dropped off and Doug was trailing Lawson. Lawson continued his lead till the end, with Doug and Byrd sparring for second place. Doug held on to the slot pulling a 1-2 that gave him the overall win for the day, but the championship fell to Joe Byrd.

“Joe has worked hard for this title,” Doug graciously conceded. “It’s been a fun and exciting year but certainly had a lot of problems surrounding it. It was especially nice to have Jeremiah here today, back at the races where he belongs. The Suzuki LT-R450 was just fantastic all year. It’s an awesome machine but I couldn’t have done any of this without the support and help of the whole team and the sponsors.”