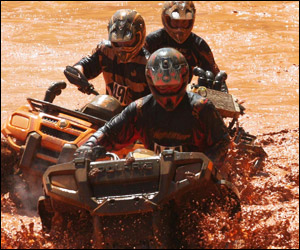 In the Supertrapp Mud Bog competition, Maggie Robertson took first place in the “Polaris Mud Chic Open” class on her Sportsman 800 and her husband, Brian, took second out of 65 entries in the “Pro Series” class on his Sportsman 800.

JW Otwell and his Sportsman 500 took third place in both the “Bogger” and “Pro Series B” classes. Kelly Knutson and Jesse Johnson took top honors out of 20 entries in the “RUV” class in their bog-dominating RANGER RZR.

For the Maxxis Mudda Cross competition, Randy Miller blazed through the bog on his Sportsman 500 for a first-place finish in the “500cc or Less” class with teammate, JW Otwell finishing second with his Sportsman 500.

Miller also took third in the “Open” class on a Sportsman 800. Trey Thomas and his Sportsman 800 X2 took second out of 90 entries in the “501cc & Up” class and Jesse Johnson took third out of 14 in the “RUV” class on his RANGER RZR.

The RANGER CREW also made its Mud Nationals debut as part of the EPI Endurance Challenge.

The six-man team entered the race on an exhibition basis and ended up posting the fastest time and was one of nine of the 18 entrants that finished the race.

The race result was a true testament to RANGER CREW’s power and ruggedness.

The team’s next outing is the Texas Mudfest, at Gator Park, in Longview, Texas, on May 1-4.