History Made for Polaris Yet Again! 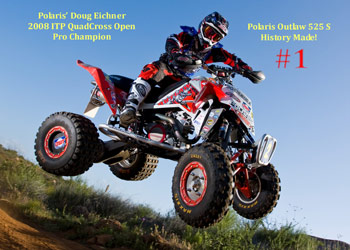 On November 30, 2008, the Polaris/Lone Star/Eichner Racing team prepared ATV racing legend and Multi-Time World and National Champion Doug Eichner for the ninth and final round of the ITP QuadCross race held at Glen Helen Raceway, located in San Bernardino, Calif.

Eichner held a 12-point lead entering the final round of the race series and the thought of adding another “first” in the Polaris history books by delivering the first Professional Level Motocross Series Championship to Polaris was exciting for the whole team to consider. Eichner, seemingly always cool under pressure, appeared oblivious to what was at stake and approached each Moto with his typical hard-charging style.

With 14 pros at the starting gate, it was Eichner who took command of the track with a holeshot start in Moto 1, and stellar performances in each race. Eichner secured the ITP QuadCross Open Pro Series Championship with a first place finish at the final round of the season and a 20-point lead over the second place competitor.

Eichner has been a consistent advocate of the Polaris Outlaw 525 S since his very first ride on the machine claiming it to be the best handling machine he has ridden to date. Eichner’s efforts with the Outlaw 525 S garnered him six first place finishes in the nine-race ITP QuadCross Series and a total of eight podium finishes, while boasting a flawless mechanical performance year in the Open Pro Class in the ITP QuadCross Series. Eichner also won the Pro Main Event at the WORCS Lake Havasu race and the 2-hour Saboba Grand Prix aboard the Outlaw 525 S in 2008.

Eichner received supportive efforts from friend and mechanic Todd Hunt, Cheri Hunt and Caide Hunt who made the trip all the way from Utah to be present. Yoshimura’s George Fickett and friend and and pit support, Larry Heidler, were also there to provide support and add to Eichner’s cheering section.

“Each win on my Polaris machines becomes a special memory for me and I am so honored to be given the opportunity of doing my best on behalf of all the wonderful people I have come to know at Polaris. I want to extend my sincere appreciation to Eric Nault, Polaris Race Team Manager, the Marketing Team and the entire Engineering Team at Polaris, as well as Dan Fisher and his superior staff at Lone Star Racing. And, since teamwork is essential, I also wish to extend my gratitude to each and every sponsor of the Polaris/Lone Star/Eichner Racing team, crew and my family who all helped to earn this history making achievement,” said Eichner.

The Polaris/Lone Star/Eichner Racing youth rider and five-time National Champion, Caide Hunt shared some track time aboard her modified Polaris Outlaw 90 MXR. With so many competing priorities this year, George Fickett of Yoshimura and Doug Eichner were finally able to put some resources and time towards this unit and the team’s little superstar put together a performance of a win in heat 1 of the 90 cc and Above Mod Class and a near photo finish in heat 2 giving her a 1 – 2 finish and a second overall for the day. The 2009 year looks promising for this young superstar.

“We are all extremely proud and excited at Polaris with the success Doug Eichner and his team have brought to Polaris,” said Eric Nault, race team manager for Polaris. Doug brought Polaris our first Professional Level Win in 2007, and successfully demonstrated the unique abilities of the Outlaw 525 IRS including the ability to jump the IRS an unofficial 207 feet. We congratulate and thank Doug Eichner, his team and sponsors for the superior efforts in 2008 securing the following year-end results: