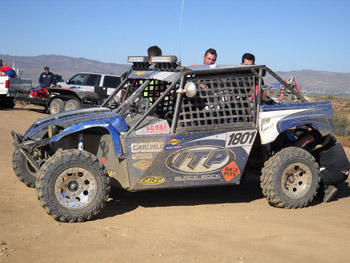 There is no tougher test of man and machine than the SCORE Baja 1000. ITP has just aced that test by winning the 2009 event in the Sportsman UTV class on BajaCross tires and T-9 Pro Mod wheels.

This class was dominated by the Team Green Kawasaki DragonFire Racing team, with Reid Nordin, Hans Waage, Todd Romano and Larry Roeseler at the wheel of their Kawasaki Teryx.

This talented crew enjoyed a nearly flawless run, completing the 672-mile/1000-kilometer course in northern Baja in a time of 24:32:37, for an average speed of 27.41 mph over what many considered to be one of the most demanding Baja 1000 courses in some time.

Of 328 starters, just 185 finished — only 56.4 percent! It was the second big win for the team this season, having captured the Baja 500 in June on BajaCross tires as well.

If not for some fuel-related technical issues, the second car fielded by this team could have had a real shot of making it a one-two performance. Driving duties in the DragonFire Racing-prepped ITP/Carlisle Teryx were handled by Dave Roberts, Bob Viau, Chris Koch, John McCarthy, Cody Currie and Fred Sutter, with backing from Black Rock off-road wheels and Ultimax performance belts.

This entry was the fourth Sportsman UTV entry to cross finish line in Ensenada, but was just outside the official time limit. This was an outstanding performance for a team with limited experience in Baja, in a new car that was put together in a very short timeframe. Everyone agreed that it was a great adventure, and vowed to return.

In an event that’s notoriously tough on tires, neither team suffered a single tire failure. The Roberts-led squad even ran the same set of tires and T-9 Pro Mod wheels they used for over 200 miles of pre-running in the weeks leading up to the event! It was an outstanding debut for the T-9 Pro Mod, proving their lightweight yet durable capabilities in the world’s most rigorous test lab.

Congratulations to everyone involved in this inspiring effort. You showed once again how tough it is to compete in the Baja 1000, and how ITP tires and wheels can stand up to the test!