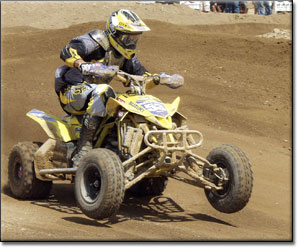 Yoshimura’s Ellis made it a hat trick at this event, scoring his third straight 4-Stroke World MX title. The Suzuki rider, using ITP Holeshot MXR6 tires, dominated the 2007 race, which was run on the same Glen Helen Raceway course as the ATVA National held a month prior but was much rougher due to the hundreds of motorcycles also competing here over the weekend.

Ellis came from way back at the start of both 20-minute motos, and both times pulled away from the field to card a seemingly easy 1-1 moto tally for the overall victory.

Second overall on the day was Josh Creamer, putting in his best ride yet on the new Monster Energy Kawasaki KFX450R.

Creamer, on ITP Holeshot MXR6 tires, led portions of both motos while battling with Team Yamaha’s Dustin Nelson. The Team Green rider ended up with a 3-2 moto score for second overall, despite a leaky radiator hose in the second moto.

Nelson grabbed the first moto holeshot with his ITP Holeshot MXR6 tires (mounted on ITP T-9 Pro Series wheels) and was in the hunt in both races on his YFZ450.

At the checkers, 2-3 moto results would land him on the third step of the final overall podium.

So it was three different ATV brands in the top three finishing positions, but they had one big thing in common: they were all running on ITP.

Dirt Trax Onlinehttps://www.atvmag.com
Check back frequently for new content and follow us on social media!
Previous articleTeam Picks Up Wienen For A Triple Threat
Next article250 Tiger 3-Wheeler