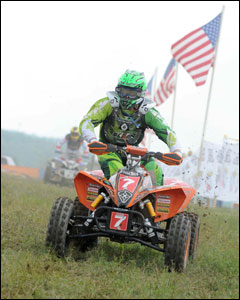 Kiser adapted well to the rough and technical track starting within the top five and maintaining that spot the duration of the race. His teammate, Adam McGill, was not far back off the start running inside the top ten.

Both Kiser and McGill had a good first few laps until bad luck struck McGill when he broke his shifter on a large rock. McGill rode as best as he could while stuck in 2nd gear until he made it to the pits where the KTM crew provided him with a new shift lever.

He pulled back on to the course dropping approximately five positions. In an attempt to make up time, McGill came upon the dreaded rock section once more and tried increasing his speed as he plowed through the boulders.

Unfortunately his left front wheel got stuck in between two rocks as he was speeding through which sent McGill over the bars while cracking the wheel. Once recovered, he again visited the pits to repair the damage.

With little time left in the race he charged through the pack to salvage as many positions as he could and eventually crossed the line in 15th. Kiser rode a smooth and consistent race to finish a solid 5th place overall.

The GNCC Series will now take a two month break. The next round is scheduled for September 13-14, 2008 in Snowshoe, WV.