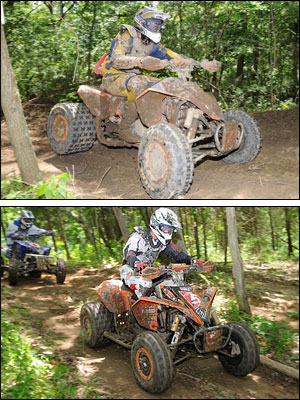 Sparta, KY – FRE KTM Factory ATV riders Adam McGill and Taylor Kiser made their way to Kentucky for the seventh round of the ATV GNCC Series where hot weather and a long day awaited.

Both FRE KTM Factory riders got a decent jump off the line as the herd of riders neared the first turn. Kiser almost had the holeshot nailed down until a rider hit him from behind pushing him into another group of riders.

Kiser and the riders he collided with were stuck together and lost precious seconds untangling from each other. Meanwhile, McGill was sitting in 4th looking for another good run.

Now back on the track, Kiser had begun to move through traffic to gain back positions he had lost on the start. He had moved up into the top twenty and was neck and neck with another rider down a fast straightaway heading toward the woods.

When they neared the turn to enter back into the woods Kiser and the rider smashed into each other causing both riders to go down. After the crash, Kiser came in for a pit stop to grab a new helmet and goggles.

During this time, his teammate, McGill was having a pretty good run up front. McGill had moved into 2nd and even led for a bit in the first few laps but dropped back to 4th after getting a stick wedged in his front end. He pit on the third lap to quickly get the stick removed before going out for lap four.

On the fourth lap, Kiser was busy plowing through traffic trying to gain as many positions as he could before the checkered flag. McGill was back in 4th and had started to ride a comfortable race until he hit debris that derailed his chain, broke his sprocket bolts and bent the sprocket. The damage done to his KTM was enough to take him out of the race.

At the finish, Kiser had made up an incredible distance and managed to salvage a respectable 10th place class finish. With seven rounds down McGill sits 2nd in points while Kiser hangs on to 7th.

Dirt Trax Onlinehttps://www.atvmag.com
Check back frequently for new content and follow us on social media!
Previous articleKYMCO Introduces Two New Performers for 2009
Next articleRath Puts Sportsman on the Podium