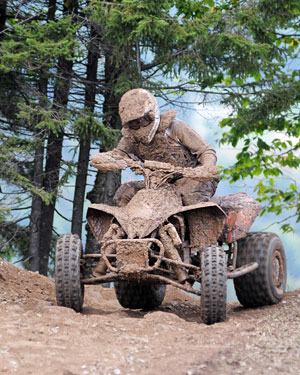 KTM/FRE Factory rider Adam McGill won his fourth race of the season at round 10 of the ATV GNCC Series after four challenging laps on the West Virginia soil.

The Snowshoe event is unique in that riders start in rows of five on the street below the Snowshoe Mountain Ski Resorts. McGill was fortunate enough to start in the first row based on his overall results this season while his teammate Taylor Kiser was one row back.

McGill and Kiser both started well and soon were involved in an intense battle amongst the top five during the first lap of the event.

McGill, who is a native of West Virginia, performed great on the course and had moved into 2nd place by the end of the first lap. Kiser was close behind in 4th position.

“You never know what to expect out here. One minute you think you are cruising through a nice meadow and the next minute the bottom falls out of it and you sink three feet,” remarked McGill on the changing course conditions.”

Out front McGill battled with Chris Borich for 2nd place. The two swapped positions back and forth until McGill capitalized on a mistake by Borich to secure 2nd. Once in 2nd, McGill focused his sight on current leader Bill Ballance.

McGill managed to pass him on a hill-climb but Ballance caught up seconds later when both riders were forced to stop and wait for a bottleneck on the course. “When we got to the bottleneck we just stopped and stared at each other. Neither of us could go anywhere so we just shrugged our shoulders and waited,” commented McGill. Eventually a line cleared and they took off. McGill got over the hill first and went on to win the race.

Meanwhile, Kiser, who had been battling within the top five the entire race, had a spill of bad luck on the last lap of the event. “I was sitting in a good position and feeling great on the last lap when, suddenly, my motor stopped. I was definitely upset that I had a mechanical issue, but those things happen. The course was challenging today and that made it fun. I just hope to come back the last three rounds and finish on the podium,” stated Kiser.

McGill, who was featured on the weekend’s event t-shirt, was very happy with his win, “I love this race and I am excited to win in front of my family and hometown crowd. I can’t thank my crew enough. The bike ran flawless today. I can’t wait for the next race to hopefully carry this momentum over.”