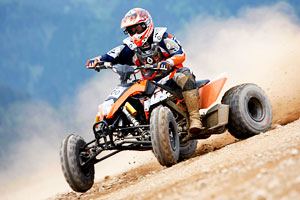 Tim Farr tallied a historic second-place overall finish riding a KTM 525 XC ATV at the Erzberg Iron Road Prologue in Austria over the weekend in front of 15,000 race-crazed European spectators.

Farr, a 13-time ATV Pro National Champion, competed against a world renowned field of 1,500 dirt bike and ATV riders on the “Iron Giant”, an intimidating iron ore mountain that has been created from 100 years of mining operations.

Farr’s historic finish at Iron Mountain, a treacherous race that closely resembles Pikes Peak, was 60 places better than any previous ATV competitor had recorded in the 14 year history of the event.

It was Farr’s first appearance at the Erzberg Rodeo, an event he said he had been following with interest for several years. “I’ve always wanted to come here and compete. I was pleasantly surprised to run with the front runners and I definitely want to come back to Erzberg again,” Farr said at the post race press conference.

The Erzberg Iron Road Prologue consists of two days of time trials on 11.2 miles of high speed mining road that climbs 2,300 feet in elevation with 100-foot cliffs on each side of the road.

Day one of qualifying narrows the 1,500-rider field down to 500 competitors for the second day of time trials. Farr’s first day success on the KTM 525 XC ATV set him up nicely for a historic second place overall finish of 9:12.41, just 10 seconds off the pace of the overall winner.

Now Farr shifts his focus back to the U.S. and his KTM/FRE ATV GNCC race team consisting of riders Adam McGill and Taylor Kiser.

The team heads to Sparta, Ky., this weekend with KTM’s McGill leading the XC-1 Pro class standings ahead of his teammate Kiser, who sits in a respectable sixth place as the series nears its mid-point at Round 7 this Saturday.