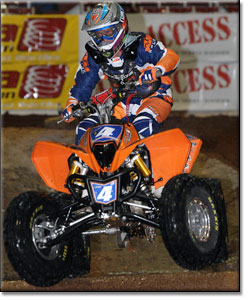 KTM’s Tim Farr added to his already impressive year with another win, this time at the first-ever ATV EnduroCross!

The ATV EnduroCross took place on Sunday October 7th at the Lazy-E Arena, the day after the second round of the Endurocross series. Saturday’s track was modified to better accommodate for ATV’s; most notably it was wider than the previous night when only motorcycles were allowed on the course.

ATV racers were excited to try this new event and were eager to see how challenging the course would be. Farr stated, “The course was fun, but challenging.

The rock section stalled most people, including myself.” The majority of riders agreed that the rock section proved to be the most difficult obstacle of the night as it was hard to find a good line through the rocks especially if someone else was already stuck there.

Farr faired well throughout the entire day. His streak began when he won his qualifier. He then turned over the best qualifying lap time giving him first gate pick for the main. In the main, it was Farr who came around the first corner grabbing the holeshot. By the end of the first lap he already had a five second lead!

“The toughest part of the main was getting around the lappers,” Farr reported. “The track was one-lined and when a lapper had that line, it was hard to find a route around them.” Despite the lapped traffic, he found a way through and maneuvered safely around the course to take home the win with a 20 second lead over second place.

“I had a lot of fun today, my KTM 450XC Sport ATV was running great, so all I had to do was ride safe and keep a good controlled pace.” Farr is on his way to proving himself as one of the most versatile Pro ATV riders on the scene as he has already secured a Supermoto and Dirt Track championship title this year.

Farr and his KTM machine have proved to be quite the winning match, and the year’s not done yet!