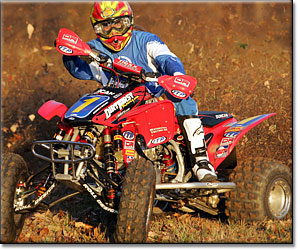 Cross-country race veteran Andy Lagzdins captured his first number one plate at the final round of the 2007 OMA Nationals ATV Championship Series at Millerstown, Kentucky.

Lagzdins had set the table for this title by winning five of the previous nine rounds, and needed only to put in a solid finish in the series finale to clinch the championship.

The 38-year-old Baltimore, Maryland, native did just that with a conservative second-place ride, taking the checkered flag less than a minute behind three-time and defending champion Rob Zimmerman.

Lagzdins accomplished this feat despite fracturing his throttle thumb at the third round of the series in May while leading the championship, forcing him to miss the fourth round and ride hurt in the fifth.

But Lagzdins rebounded to put his Duncan Racing-backed Honda 450 back on top of the standings by winning rounds six, eight and nine.

Lagzdins used ITP Holeshot GNCC front and rear tires throughout the 2007 OMA Nationals. His tire choice reliably provided an ideal balance of acceleration, braking and cornering performance, as well as a light feel and smooth ride, which reduces rider fatigue during long stints in the saddle.