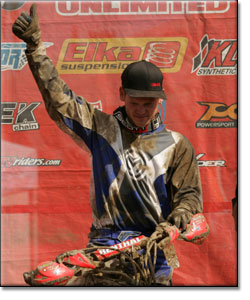 The summer break is over, and the Killer Bs are ratcheting up the tension again. Chris Borich won the first GNCC ATV event of the fall, nabbing a three-point lead in the race for the title. Bill Ballance took third place at the Geico Mountain Ridge GNCC, held September 1 in Somerset, Pennsylvania.

“What a race,” Borich told gnccracing.com. “Some people think I haven’t been training over the break, but guess what? I have been. I got the points’ lead now, and I’m just going to come out here and do the best I can and hopefully win the rest of them and grab me a championship. I need one.” Borich finished in 1:56:25 hours, after a bruising contest that was closely fought all the way to the finish line.

Ballance was not discouraged despite his difficulties during the race, which included mechanical problems. “Hey, I got third. I don’t know how, it seems like we were just barely going around the track, but it’s what I needed to hopefully move onto the championship after all this,” he told gnccracing.com.

In the morning race, it paid to be part of the Maxxis-riding Team Warnert Racing Can-Am:  Michael Swift, Scott Kilby, and Cliff Beasley swept the morning podium and won the Limited 4×4, Open 4×4 and Lites 4×4 classes respectively.

Maxxis congratulates Chris Borich and Michael Swift on their victories and thanks all of these fine riders for their outstanding performances.