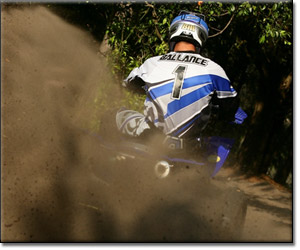 With eight of the top eleven ATV riders at the Maxxis General, Maxxis consolidated its early hold on the 2007 GNCC series. Bill Ballance took his second victory of the season in 02:00:06, while Chris Borich came in a close second at 02:00:08.

Ballance’s Sunday win was his fifth straight at the Washington General. “This place is just good for me,” he told gnccracing.com. “It gets pretty rough, and it seems like the faster you go, the better it is; you just stay up on top and float all over it.”

Ballance’s brother Brandon took the holeshot and an early lead, with Bill heading the pack later in the race. “I got out front and just held it as long as I could, and I figure that’s going to help me get my pace up. It feels great,” Brandon Ballance told gnccracing.com. The younger Ballance’s great start continues Maxxis’ holeshot dominance. Ballance’s holeshot at the General is the 15th in a row for Maxxis riders, tracked since the beginning of the 2006 season.

The FMF Steele Creek is the next GNCC event, scheduled for March 24-25 in Morganton, North Carolina. Maxxis congratulates Bill Ballance on his victory and all of these riders on their fine performances.