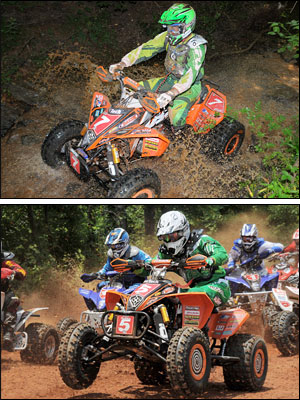 McGill got a decent start and was battling with the top riders early on. Unfortunately, his teammate, Kiser, had worse luck and neared the first turn almost dead last.

In the first lap, Kiser was able to charge through the pack and move into 10th at the check point. From that point it became more difficult for Kiser to pass the other riders as the course was dusty and tight through many sections.

I rode to the best of my ability but once the top riders began to spread themselves out it was hard to make up time in the dust. It appeared that where you started was where you would finish, commented Kiser.

Kiser did eventually move into 8th place and began to catch William Yokley and Chris Borich on the last lap.

By the time I got them in view, we were down to three miles to go with only tight sections left. Unfortunately, I couldn’t get close enough to make the pass, reported Kiser. I was happy with my performance today considering my poor start and the track conditions and I am just hoping for a better start at the next round.

McGill rode a smooth and consistent race and finished 5th overall. His 5th place finish puts him 3rd overall in the series points just one point shy of second place.