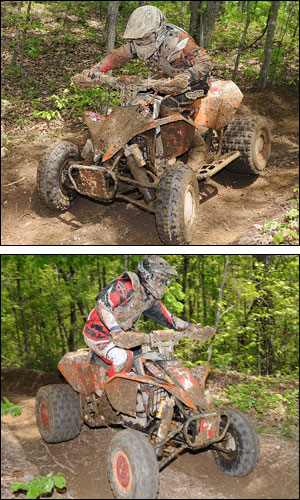 KTM’s Adam McGill maintains his series points lead now five rounds into the ATV GNCC season in spite of the difficult circumstances he encountered at the Loretta Lynn’s event.

McGill and his teammate Taylor Kiser were having a great ride at the Loretta Lynn’s Ranch running in 2nd and 3rd place respectively in the early stages of the two hour event.

However, on the third lap McGill’s bike cut out with an electrical problem which caused him to not finish the event.

Despite his recorded 18th place finish he still holds the point lead that he stacked up during his previous three race wins.

Kiser’s luck outlasted McGill’s as his bike made it to the last lap before suffering from the same issue.

Kiser was able to crawl across the finish in 8th which moves him to 7th in overall series points.

It’s unfortunate that we had a problem today but I am confident in my team and my bike and know that they will do whatever it takes to fix the problem and ensure that we are ready to race at the next event, commented Kiser.