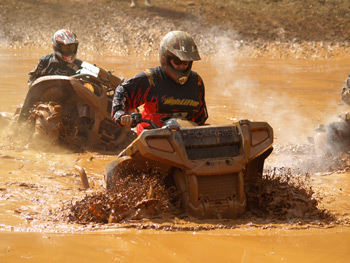 Team High Lifter-Polaris Racing continues to keep their winning streak going as they competed at Mudstock in Jacksonville, Texas on October 11th, 2008 at Mud Creek Off Road Park.

This year Mudstock featured the Swampcross, Buddy Run and Mudbog competitions for ATV enthusiasts to participate in.

In the Swampcross Event, team racer Josh Gorman finished in first place in the RUV Class in a 2009 Polaris Ranger RZR-S.

In the Mudbog, team racer Brian Robertson finished third in the RUV Class while teammate Adam Schumaker finished in third place in the Super Pro Class on his Polaris Sportsman 800.

For a complete schedule and more information on Team High Lifter-Polaris Racing see their official site at www.highlifter.com/racing/.

Dirt Trax Onlinehttps://atvmag.com
Check back frequently for new content and follow us on social media!
Previous articleYamaha to Celebrate at Ironman GNCC Series Finale
Next articleCan-Am All About The Beef