New Brunswick ATV Owners May be Out of Luck 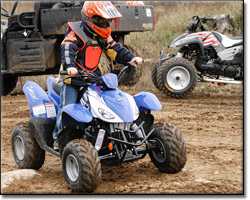 New ATV legislation completely banning riders under the age of fourteen from using ATVs in New Brunswick is going before Provincial Parliament today (Tuesday, February 20, 2007) for its second reading.

There’s much anger from the public on this issue and although the opposition (Conservative) stands firmly against it as presented, the Liberal Government is railroading ahead with the legislation.

There are already demonstrations being organized and the thousands of ATV owners in the province, especially those with children who ride with the family, are clearly upset that the Liberals have moved ahead without thought or consultation from the many ATV trail volunteers and users throughout New Brunswick.

Similar legislation has been passed in Nova Scotia and has netted a 30 percent drop in ATV sales there. Also, ten ATV dealers have folded in the wake of this shallow and short term thinking.

It’s interesting that the so-called experts who drafted this proposal have not suggested mandatory driver education, supervision or the legislated use of age appropriate ATVs. Doesn’t sound like they’re really all that interested in the safety of children, does it?

A better proposal would be that young riders up to age twelve would require adult supervision and mandatory safety training for all kids up to age fourteen who then could be granted off-road licences once they qualify.

Seems like a much more democratic way of doing things to us. Canada is still a democracy isn’t it? I’ll guarantee the clubs and volunteers would have been glad to participate in this if anyone had asked.

If you’re fried with government on this issue, check out letthemride.ca and start hassling those deep thinkers your province elected.