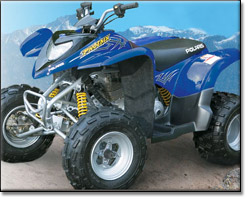 Polaris has stepped out of the box with the intro of the all-new Phoenix 200.

This all-new model has been conceived and designed here in North America but is built entirely off-shore at Polaris’ mini-ATV manufacturing facility.

This is the first time we’ve seen one of the big eight manufacturers bring an off-shore (excluding Japan) full sized ATV to the market.

We haven’t been able to ride the Phoenix as the prototypes on display at the 2005 Polaris press intro where not operational.

Obviously, the cost to manufacture price sensitive models here on these shores is driving OEMs to look for ways to make low dollar 4-wheelers more profitable.

The pricing just released for the Phoenix looks extremely aggressive at $2999 US.

Dirt Trax Onlinehttps://www.atvmag.com
Check back frequently for new content and follow us on social media!
Previous articleHelmets Use is Critical
Next articleArctic Cat Prototypes Vandalized