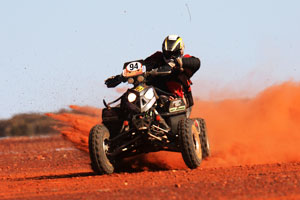 After more than 2500 miles and 7 torturous days, Polaris Outlaw mounted John Maragozidis has won the inaugural ATV Class at the Dakar down under, the Australasian Safari. Maragozidis crossed the line in 31hr 42m, almost 2 hours ahead of his next rival.

With more than 1600 miles of timed competitive stages on some of Western Australia’s most punishing desert terrain, the Safari covers both private and public trails before finishing in the state capital, Perth.

The introduction of the quad class this year has added another dimension to the 21 year history of one of world motorsport’s most grueling events.

Unlike the Dakar events in Europe and Africa, Australasian Safari competitors must also occasionally dodge 5ft tall Kangaroos and Australia’s maddest bird, the Emu, which is about the size of an Ostrich. They love to run along side you then cut out in front! Said Polaris Australia’s National Sales Manager, Peter Harvey.

Unfortunately, this year an entrant in the ATV Class from South Africa hit a 150 pound Kangaroo. Reportedly he continued to race with what he thought was a painfully bruised thigh.

The Australasian Safari is a rally style event where competitors race at set intervals and compete against the clock. Cars, Motorbikes and ATVs all complete the same competitive sections.

The Outlaw 525 IRS handled the terrain brilliantly. I don’t think I’d attempt this race on a quad without a independent rear suspension, said Maragozidis. When you’re belting across rocky terrain and bull dust at 100kmph, traction and handling are everything.

This year, Polaris Australia and its dealers have made an outstanding investment in ATV racing, and it is great to see the results, said Harvey.

So far this year Polaris Racing has won the Australian ATV MX Tri-State Series, the Queensland ATV MX Championship, and currently has a solid lead in the Victorian ATV MX Series.

Dirt Trax Onlinehttps://atvmag.com
Check back frequently for new content and follow us on social media!
Previous articleDo I need POwer Steering On My Grizz?
Next article2008 Suzuki King Quad 750