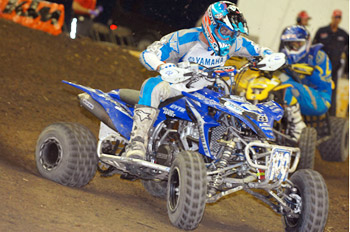 Brown (No. 199 Factory Yamaha) took the top qualifying spot and came out of the gate third for the final. Muscling his way through the field, Brown took the lead on the first lap and fought off Canadian Greg Gee (No. 10 Team Epic Can-Am) for the victory. Harold Goodman (No. 708 American Honda/Houser Racing Honda) finished third.

Brown said he hopes the victory will lead to positive results as he heads to the Can-Am Grand National Cross Country (GNCC) race this weekend at Unadilla Valley Sports Center in New York.

“I really like Supercross racing,” said Brown. “I knew we could win all year in the ATV Motocross Series, but we had a lot of bad luck. This win definitely helps. I’m going to the Unadilla GNCC this weekend, so hopefully we can carry the momentum into there.”

Brown, one of seven Americans in the field, was pleased to bring the honor back the United States.

“It’s great,” said Brown. “The guys up there really wanted it. It was really the only time they got to race the top ATV riders in the world in front of their home crowd. Then again, everyone wants to win every race.”

Dirt Trax Onlinehttps://www.atvmag.com
Check back frequently for new content and follow us on social media!
Previous articleNEATV-MX Round 8
Next articleFMF Announces New Director of Marketing