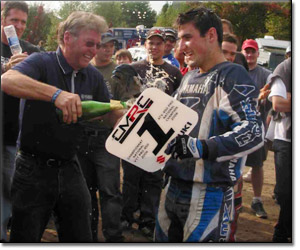 The 24 year old racer from Saint Romuald QC struggled through a difficult season, chasing evasive mechanical gremlins in the face of fierce competition.

The championship decision would come right down to the last lap of the final moto offering the crowd an exciting and dramatic finish to the year.

The following is taken from an interview with Richard following the event:

The final round was held in Notre-Dame, Quebec, the home town of my strong opponent Jasmin Plante. The battle was hard-fought in the first moto and I won over Jasmin by only a few seconds. The second moto proved to be a real drama! I was now only 1pt back from the overall. Jasmin and I diced it out aggressively for the first few laps, when suddenly we collided and both stalled. I got the Yamaha running first, and now I was in the ”bring it home mode”. But James Bank had another plan, as I was smoothly going around the track he was on FIRE trying to catch me. I did not understand my crew sign urging me to get on the gas with only 2 laps to go turns out he was only a short way back. I upped my pace and increased the gap a bit. I took the checkered flag…and won the championship by only a few lengths and a mere 2 pts.’

Congratulations to Richard and his sponsors including Toyota, Elka and RP Evolution ATV Products. You have proven once again to be a very worthy champion.