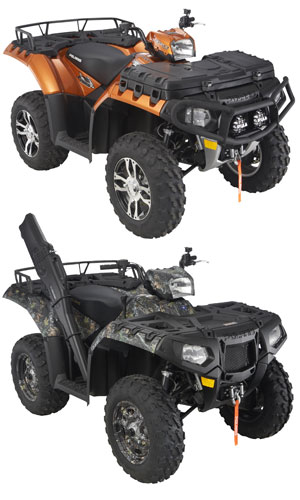 The 99 percent-new Sportsman XPs feature an 850cc engine that churns out 70 horsepower or a 550cc engine delivering 40 horsepower.

Additional features on the limited edition model include:

Two Browning editions will be offered in the Sportsman 850 XP and 550 XP models. All include the following additional features:

Machines will be available in US and Canadian dealerships in Fall 2008.

Dirt Trax Onlinehttps://www.atvmag.com
Check back frequently for new content and follow us on social media!
Previous articleOutlaw 450MXR Finds Home in the Top Ten!
Next articleArctic Cat is Title Sponsor for Danny Lasoski