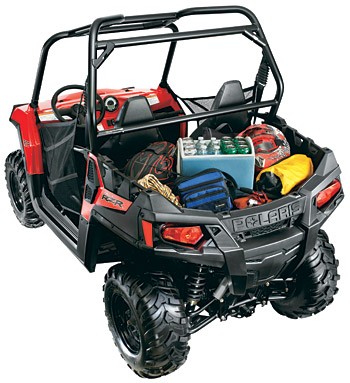 Since 2008, Polaris has introduced a new RANGER RZR model every year and Model Year 2012 will be no different, introducing the new RANGER RZR 570, the second trail-capable side-by-side in the RANGER RZR family.

Priced at $9,999, the single-cylinder unit offers a value trail machine that stays true to the RANGER RZR family promise of being the ultimate combination of power, suspension and agility.

At the heart of the RANGER RZR 570 is an all-new ProStar 570 single cylinder, DOHC, electronic fuel injected engine. The engine is the second in the ProStar family, made specifically for Side-by-Side vehicles, which also includes the ProStar 900 introduced earlier this year in the RANGER RZR XP 900. The ProStar 570 has 650 watts of stator output and features a removable cargo bed floor and a wet sump for easy serviceability.

To complement the new engine, Polaris equipped the RANGER RZR 570 with a new transmission that was specifically built to optimize the power of the new ProStar engine. Its optimized gear geometry means more power to the ground, less driveline noise and lighter weight. The innovative design, first featured on the RANGER RZR XP 900, features a helical cut final drive with high torque capacity to maximize efficiency.

To tackle the rugged trail, the RANGER RZR 570 features an all-new, ultra smooth Independent Rear Suspension (IRS) with specifically-designed geometry that provides 9.5-inches of travel in the rear. The front suspension features Dual A-Arms with 9-inches of suspension travel.

Coupling the front and rear suspension with a 77-inch long wheelbase, pre-load adjustable ZF Sachs Shocks on all four corners and exclusive front and rear anti-sway bars that keep the chassis flat while cornering, gives the RANGER RZR 570 the ability to soak up anything the trail can throw in its way.

When the trail gets rough, the vehicle’s True All-Wheel Drive (AWD) system puts the 50-inch width to work in and out of corners.

It’s the easiest-to-use and fastest responding on-demand system that automatically engages all four wheels when forward traction is needed and it reverts back to two-wheel drive automatically when AWD is no longer needed. The system provides easier steering, less wear and tear on driveline components, and maximum power when you need it most.

Offered in Indy Red, RANGER RZR 570 will be available at Polaris dealerships late fall. More information about Polaris’ whole line of Off-Road Vehicle offerings can be found online at www.Polaris.com.

Dirt Trax Onlinehttps://www.atvmag.com
Check back frequently for new content and follow us on social media!
Previous articleSCOTT VOLTAGE PROAIR GOGGLES
Next articleWho Is Listening to Whom?