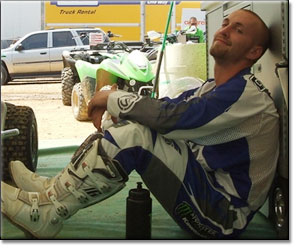 After finishing with an impressive fourth in the invitation-only AMA Pro ATV Open at Steel City, Monster Energy Kawasaki’s Josh Creamer sat down to discuss everything from the inaugural race to working with team manager and former Kawasaki ATV champion Jimmy White.

Q: First off, congrats on your race this weekend at the AMA Pro ATV Open. Tell me about this weekend. What was a highlight for you?

J.C.: Thank you. Well, other than racing, I would have to say watching the dirt bike races on Sunday. I had a good time watching those guys, especially the Motocross Lites class. Those guys are just nuts. They race the whole, entire race and there isn’t one guy who isn’t trying to make a pass until they finish the race. They just go all out.

Q: So what was it like racing on the same track that those MX guys race?

J.C.: I would have loved to maybe mix it up a little. Maybe have the bikes out before the quads rode because we went out on a fresh track and no one had ridden on it. So we were the ones that were breaking in the track, which was a little difficult because of the rain.

Q: Onto your season in the World PowerSports Association ATV tour. The start of the season didn’t seem to take off like you wanted. How has it been being on a whole new quad and developing the Kawasaki KFX450R?

J.C.: Last year, I kind of did the same thing. I got on a new quad and it probably took me a good half of a season to get comfortable. By the end of the season I was feeling good and turning out some good results. With the Kawasaki, it’s a whole new bike for the team as well, so it took a little bit longer. Though, from where we started at the beginning of the season, we’ve come a long way. I think I have and the quad has with things like suspension. The last four or five rounds I’ve been able to be in the top five and I know we can get our first podium.

I’m looking forward to next year because I’ll be used to the bike and we can make the quad better in the off-season.

Q: What’s been the most unique feature on the KFX450R?

J.C.: The fuel injection feature is probably the most unique or different feature that the quad has that I’ve not ridden with before. It probably makes it a whole lot easier as well not having to deal with setting problems. Fuel injection takes a lot of the hassle out of it.

Q: This is Kawasaki’s first season in some time to have full factory support for an ATV team. What has Kawasaki done that’s stood out to you?

J.C.: Well, it’s pretty much how professional they want everyone to look and how they want everything be run. Everything looks great and the people help to make it run really well. I think Kawasaki takes a lot of pride in how their stuff is portrayed and it shows when you go to a race.

Q: How has Jimmy White (former Kawasaki ATV racer) helped you this year?

J.C.: Jimmy has a drive. He wants to see the bike on top. Since he is a former racer he’s been able to give me encouragement. The past few races, there have been a couple of jumps that no one had done yet. I had it in my own mind that I could do it. Jimmy would watch me during practice and would tell me ‘I think you can make it’ and I would go out there and make it. So things like that. He knows the sport so it all works out really well.

Q: Lastly, there is always going to be races where you didn’t do as well as you wanted. How do you get through tough weekends like that?

J.C.: It’s easy to beat yourself up, and I do to a certain degree. But I use it in my training and I use it as my motivation to do better. That’s the only way to walk away from bad weekends and end up on top the next.