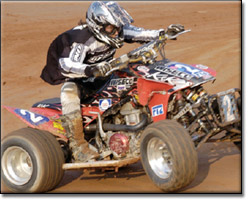 Staying true to its mission of growing the sport of Supermoto in North America, NASMOTO (North American Supermoto) is pleased to announce the official AMA & ATVA launch of ATV Supermoto Racing.

ATVs will make their debut in the NASMOTO Supermoto Series at Circleville Raceway Park in Circleville, Ohio the weekend of May 13.

“This is such exciting news for four-wheel riders,” exclaimed All-Terrain Vehicle Association (ATVA) Director Doug Morris. “ATV dirt track and TT riders have been asking for this for years. To have this opportunity offered is huge. We are all really looking forward to this NASMOTO event and to the spectators’ response. It will be interesting to see lap times on these tight, action-packed courses.”

Because ATVA functions as an advocacy group, similar to the AMA, it cannot run an event itself. NASMOTO teamed with Regional Promoter Pat Moro to introduce ATV Supermoto at the grassroots level.

In addition to inclusion at Circleville, ATV Supermoto racing will compete at four other sites in the NASMOTO series, including the NASMOTO AMA Supermoto Grand Championship at the Queen Mary Ship in Long Beach, California.

Promoter Pat Moro of Ohio Supermoto is equally impressed at the prospect of seeing the quads race at Circleville. Moro is working to design a track enabling multiple lines, including an extensive dirt section.

In addition to the 10-turn course, Circleville Raceway Park’s Euro-style race track includes a 700-foot straightaway. There will be a limit of 50 entries for the first ATV event in the NASMOTO schedule.

With NASMOTO Supermoto of Ohio hosting a race school day, demo dealer day, exciting Supermoto racing and the introduction to ATV’s to Supermoto this event is not to be missed.

For more updates on this event please visit the following websites:
www.nasmoto.com
www.ATVAonline.com