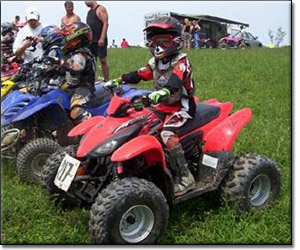 Bulldog Powersports out of Cambridge Ontario modifies Unison’s Desert Cat 90 for competition including modifications to the A-arms, I Shock and swing arm.

Bulldog also added nerf bars, ITP aluminum Holeshot rims and tires, plus a full clutch kit with springs and a lighter secondary among other things. Bulldog also claims they can lighten the entire ATV by up to 12 pounds.

Bulldog Powersports also does minor modifications for young riders in stock classes making the ATV more stable at higher speeds thus more enjoyable for the child and allowing an easier transition up to the mod class.