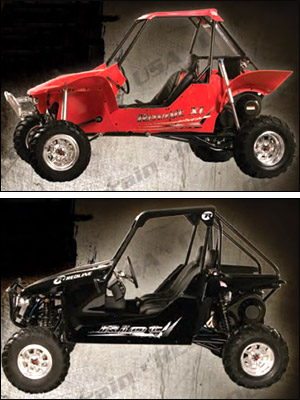 The RIOT (referred to as the TS750 during its prototype/testing phase) is the second vehicle in the company’s line of “Sport Terrain Vehicles”—high performance vehicles designed to handle all terrains.

The Redline RIOT comes equipped with a 749cc, liquid-cooled, fuel-injected, 4-cycle, 72 hp engine. This Weber engine, combined with a CVT and proprietary Redline-engineered gearbox, provides rapid acceleration, with a top speed of 65 mph.

The RIOT weighs 1,120 pounds and carries two riders. RIOT standard safety features include a 5-point harness system, wrist restraints, a quick release steering wheel, and a tubular space frame, so drivers can safely test their skills while pushing the limits of the machine and terrain.

“Drivers looking for high performance and safety can either buy a typical UTV and spend a small fortune on aftermarket upgrades, or they can buy a RIOT and get it all—right out of the box,” said Damon Flippo, West Coast Sales and Promotion Director for Redline. “And the RIOT comes with a six-month factory warranty.”

Also introduced at DuneFest was the REVOLT XL, a longer version of the single-seat REVOLT. “Our dealers and customers told us they loved the performance of the REVOLT,” said Steven Campbell, general manager of Redline, “But they wanted that same all-terrain performance with more legroom and easier access, which is what they will get with the REVOLT XL.”

Like the REVOLT single-seater and RIOT side x side, the REVOLT XL comes equipped with safety features including 5-point harness system, wrist restraints, quick-release steering wheel and tubular space frame.

Additional information about Redline Performance Products can be found at www.RedlinePerforms.com.