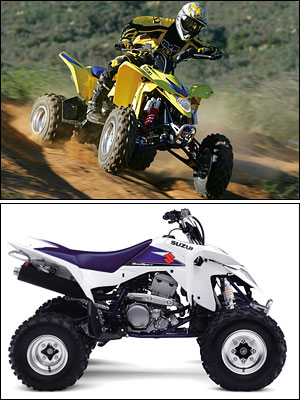 On June 25, Suzuki formally introduced the 2009 QuadSport LT-Z400 at a media event held at the Vessels Stallion Farm in Bonsall, California.

Against a backdrop of grazing thoroughbreds, this race-horse breeding farm proved to be a fitting venue to show off the 2009 enhancements to this well-bred champion ATV.

Since its inception in 2002, the QuadSport Z400 has had an impressive racing heritage as well as being a popular and versatile all-around sport ATV.

The design concept for the 2009 QuadSport Z400 was “Engineered for Fun” and with the additional performance improvements and cutting-edge QuadRacer R450-styling, the Z400 certainly lives up to its objective.

“The 2003 LT-Z400 took ATV performance to a new level,” Glenn Hansen, Suzuki’s Communication Manager explained during the presentation. “It pushed the performance edge and gave Doug Gust the Championship in the 2004 Pro Production class. The 2009 QuadSport has once again set a new level of performance.”

In addition to adopting the aggressive QuadRacer R-450 look, the new Z400 borrowed other elements from its racy sibling. First and foremost is the addition of Fuel Injection.

Electronic fuel injection gives the Z400 a noticeably smoother and quicker throttle response, improved starting and performance in a variety of conditions, and improved fuel efficiency.

Mel Harris, Vice President of American Suzuki Motor Corporation, spoke highly of the efforts that went into the design: “Suzuki is definitely the leader with fuel injection in its products.”

The 2009 model also boasts an R450-like logic and ignition system. This Engine Control Unit monitors throttle position, engine RPM and the rate of change of both. By deciding the optimum settings for volume and timing, the ECU also gives the ATV improved traction.

Externally, the chassis has been redesigned to be more accessible, functional and user-friendly. The front track has been widened by an inch, and the caster, camber and trail have all been changed. All of these modifications give the Z400 a lighter steering feel and more sure-footed handling.

Changes in both the front and rear suspension offer the rider a firmer response plus a plush feel resulting in a comfortable, enjoyable ride.

Additional changes to the 2009 model include other R450 inspired updates that make the Suzuki QuadSport Z-400 the perfect all-around sand, trail and track ATV. No other ATV offers the versatility of the QuadSport Z-400.

“Engineered for Fun”, the QuadSport Z-400 offers a combination of trail-riding fun and high-performance attitude that keep it a breed apart in performance, styling and comfort.

The QuadSport Z-400 will be available in September in both white and yellow for $6199 MSRP.