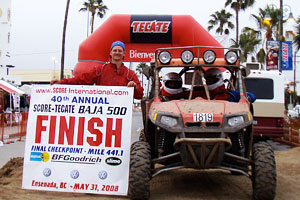 The RANGER RZR continues to be a force in the racing world, this time by not only winning the UTV class at the Baja 500 but by being the first side-by-side to ever finish the race.

After being the last vehicle to start, Mark Lindsay’s team, consisting of Lindsay, driver Phil Holdsworth and co-driver Michael King, raced the sole RANGER RZR entry to the finish line in 19:49:30.

Thirty-three miles into the race, the challenge of a loose, rocky incline brought the vehicles in front of Lindsay to a stand-still. When it was finally his turn, he blew through the obstacle with ease. The RANGER RZR did well through the sand washes, silt beds, whoops and everything the race threw its way.

“Being the first side-by-side to finish and win the Baja 500 UTV Class is a true testament to the quality and ability of the RANGER RZR,” said Craig Scanlon, product line sales manager for the Polaris Side x Side Division. “We congratulate Mark Lindsay and his team for continuing to show the RANGER RZR can dominate even in the most extreme conditions.”

When asked why he chose a RANGER RZR for the race, Lindsay responded, “For the Baja? This isn’t farm work, you need a real machine out here.”