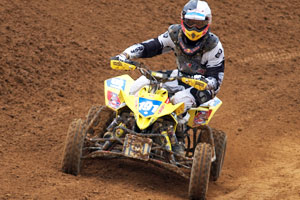 The 10th Round of the ITP/Moose AMA/ATVA National Motocross Championship not only secured the Championship for Team Rockstar / MSR / Pro Taper / Yoshimura / Suzuki and Dustin Wimmer, but also the Manufacturers’ Cup for Suzuki.

Six wins, three seconds and one third overall did the trick for the QuadRacer R450 to earn the coveted title before the final round of the series even started. In fact there was never a round where a QuadRacer R450 was not on the podium, or Suzuki was not the dominant leader.

This is the third year in a row that Suzuki quads have dominated the race series they fully competed in. For 2006 and 2007, Suzuki was the most winning bike in the WPSA ATV Pro series.

“I am very proud of our team and the hard work that every member has done to achieve this goal of the ATV MX National Championship,” remarked Pat Alexander, American Suzuki’s Sports Promotion Manager. “Our riders have shown that the QuadRacer is the most formidable weapon any rider can own to go out and win races or championships. This all could not be achieved without the support from our sponsors, the Yoshimura team, our great riders and, of course, American Suzuki.”

“Suzuki has been committed to the sport of ATV riding and racing since the beginning,” Mel Harris, American Suzuki’s Vice President of Motorcycle/Marine Operations, said. “The dedication of the company behind the bike is apparent in this and our other successes. For 25 years, Suzuki has been pushing the sport forward not only in racing, but also in technology and innovation. We are very proud of this achievement and will continue to support the sport in every way.”

Dirt Trax Onlinehttps://www.atvmag.com
Check back frequently for new content and follow us on social media!
Previous articleOutlaw 450MXR Finds Home in the Top Ten!
Next articleArctic Cat is Title Sponsor for Danny Lasoski