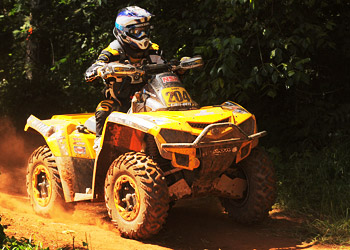 Heading into the next weekend of GNCC racing, Warnert Racing / Can-Am GNCC racer Michael Swift has much to reflect upon after his 4×4 Limited championship-clinching performance at the Unadilla GNCC in upstate New York. His impressive win aboard his Can-Am Outlander 800R XT brought him his fifth championship in a row.

“What can you say about Michael Swift?” says Jimmie O’Dell, Racing Manager for Can-Am ATVs at BRP. “He is one of the smartest, most consistent racers I’ve ever seen. When he pulls up to the line the rest of the field knows it is truly a race for second place. We at BRP are excited to see Swift get his fifth GNCC championship on the Warnert Racing / Can-Am Outlander 800R XT.”

Since making the switch to Can-Am at the beginning of the 2006 GNCC season, Swift has a winning percentage of 77 percent. He has taken the win in 48 of the 62 races he’s entered since the Orange Crush GNCC opener in 2006.

In the rest of the morning racing at Unadilla, Lexie Coulter piloted her Warnert Racing / Can-Am DS 450 to second overall in the session. She currently is fourth in the Women’s class championship.

Rick Cecco raced his Can-Am Outlander 800R XT to the 4×4 Open win, and represents his second win of the season in the class. Cliff Beasley continued his quest for a perfect season aboard his Warnert Racing / Can-Am Renegade 800R X xc as he again took the U2-class win; that win represents his 10th out of 10 races this season.

Can-Am X-Team racer, Kevin Trantham, took his Outlander 500 XT to the top of the 4×4 Lites class and Mike Penland brought himself closer to putting himself in the lead for the Utility Sr. (45+) class championship by taking a win on his Outlander 800R XT.

The next round in the 13-race series is the Titan GNCC on September 25 near Lafayette, TN. For more information on Can-Am racing, the entire 2010 schedule, the 2010 contingency program and DS 450 amateur racer support program, please visit www.can-amxteam.com.