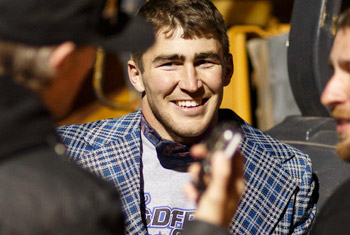 Who doesn’t like a compelling comeback story? Tragedy to triumph. Kicking adversity in the teeth. From down and out to up and in with a buzzer-beating slam dunk. Admit it: you usually pull for the underdog.

We at STI could not help but pull for Tanner Godfrey when he decided to jump his Arctic Cat Wildcat to a new world record.

Godfrey was paralyzed from the sternum down in a 2007 motocross accident and had worked long and hard to regain some semblance of mobility.

Godfrey somehow maintained his positive attitude and tenacious spirit through it all. As he once said, “Don’t ever let people tell you what you can or can’t do. Just live life. Don’t let things slow you down. You have to be tough to be successful.” He’s now able to walk short distances with a cane and has fashioned hand controls for his Wildcat so he can still rip around in the dirt.

Adding to the plot, Godfrey decided to attempt his jump near the site of his life-changing accident in Mesquite, Nevada.

It would take place during the Mesquite Off-Road Weekend event at the Eureka Casino Resort, featuring a show by the wild and crazy crew from Nitro Circus.

Not coincidentally, Tanner Godfrey is the nephew of Nitro Circus creator Gregg Godfrey. This jump would also raise funds and awareness for the Wounded Warriors Project.

Godfrey launched 105 feet through the dry night sky to easily claim an officially documented Guinness World Record. Then he turned around and did it again.

We’re proud of you, Tanner. You’re an inspiration to us all.