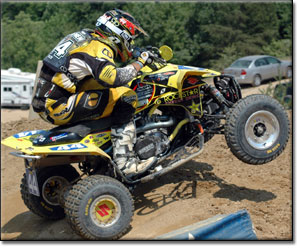 Coming off of a stormy weekend at the last race in Oklahoma, the team (and the fans) were happy to see bright sunny skies and 90+ degree temperatures.

With two main events crammed into Sunday afternoon, the weekend was jam packed with two practices and two sets of heat races both Friday and on Saturday. This intense schedule gave little downtime and mechanics and riders went nonstop the whole weekend.

Friday’s heat races were for Round Four and the weekend started out well for Doug getting a third in the first round and second in the next.

Chad not only got the holeshot but pulled first place in his first heat and third in the second. Wimmer was having difficulties that left him with an 11th and a DNF. He used a provisional to get into the main.

Saturday’s heat races for Round Five fared better for Dustin winning his first heat and coming in second in the next round. Dustin got the fastest time of the day with a 1:31. Doug placed 5th in his first and third in the next.

Wienen got stuck in the first turn of the first moto and ended up fourth. The second round of heats had Natalie and Wienen battling it out for a neck and neck race with Natalie beating Chad to the finish.

Sunday’s first main event was for Round Four, and it started with a bang, literally, as several collisions resulted in a chaotic 5th lap. Race officials threw a red flag and ordered a total restart from the beginning.

At the restart Keith Little led, followed by John Natalie and Chad Wienen. Doug Gust gated 6th while Dustin Wimmer was mired back in 8th.

Natalie and Wienen made quick work of Little and then the race was on. Chad “Wide Open” Wienen was all over Natalie in a replay of their last heat race. About five laps in, Wienen went around Natalie at the top of the track and that was it. The Suzuki QuadRacer R450 set sail and Wienen was gone.

In the meantime, a tremendous race set up between Doug Gust and Little. Lap after lap Little held off a hard charging Doug Gust. While all of this was going on, Wimmer, worked up from his bad start and was fast closing on the Gust/Little duel.

Gust finally set Little up in the whoops and past the fading rider into 3rd. Later that same lap Wimmer also made it past Little and started closing on Gust. Gust looked like he had third in the bag, but on the last lap, he hit a hole and bobbled just for an instant.

Teammate Wimmer pounced and was past. Gust recovered right away and the final finishing order at the checkers was Wienen in a commanding win, Natalie in a fading second, Wimmer, then Gust.

Wimmer was happy with the third. “I got hung up with some guys on the restart and to be honest, I’m really happy to get a third. Another lap and Doug and I would have had Natalie, but that’s the way it goes.”

Chad had said before the race that he was motivated to get in the same position with Natalie and finish what he started. “I knew I could do it, I just needed some more time. Today, Natalie was holding back to have reserve to last the whole race and I was able to sneak around him in a clean pass and then just go from there.”

Round Five of the WPSA got underway late in the day. The heat and humidity had intensified and no matter how much water they tried to get on the track, it was still very dry and dusty.

The race started with Goodman and Natalie leading the pack with Doug and Wienen behind. Wimmer trailed in 7th position. Goodman was quickly passed and it was Natalie trailed by the two Suzukis. Wimmer make short work of the rest of the pack and by the middle of the first lap it was Natalie and a trail of yellow.

This was the scenario for the next six laps – Natalie, Gust, Wienen and Wimmer. In the seventh lap Wienen got around Doug and started to put some serious pressure on Natalie.

The four top riders pulled away from the pack, setting an incredible pace that had spectators shaking their heads. With about three laps to go, Chad turned up the pressure even more and passed Natalie mid air.

With only a few laps remaining, Wimmer really started pressuring Gust hard. Going through the series of jumps called the “six-pack” Dustin put on a huge charge that saw him pull even with Gust, neither rider would let off as they flew into the corner that a fading Natalie was negotiating slowly. Wimmer went to the left, Gust to the right, as the pair tried to split around the second place rider.

The speed differential was too much and Doug hit the slower rider sending both of them to the outside of the corner. Wimmer snuck by the melee to capture second while “Digger” Doug recovered, coming out in third. At the checkers it was Wienen, Wimmer, and Gust – another Suzuki sweep.

Wienen was happy with the day. “This was a tough track to pass on, you just have to be smart and patient and wait for an opportunity to get around someone. It’s all about the training. A lot of blood, sweat and tears have allowed me to still be strong at the end of a race… which is when you really need it. The QuadRacer R450 was also a big advantage for me today, I could take tight inside lines and set up the other guys… there was nothing they could really do about it, it was great. Our Suzukis seemed to be finding traction in places where the other quads struggled. I’ve got a few wins under my belt now, things are really clicking for me. I’m looking forward to many years with Suzuki.”

Suzuki’s Operation Manger Rod Lopusnak was on hand to join in the celebration. “Watching these guys work so hard out there and win makes me really proud to be a part of this great team. The QuadRacer R450 is definitely the dominant machine out there and days like today prove it.”

Next stop on the tour another doubleheader at Petersburg, VA June 29 – July 1.

Dirt Trax Onlinehttps://www.atvmag.com
Check back frequently for new content and follow us on social media!
Previous articleChris Borich Wins At his BRP Debut
Next articleSUPERCLAMP MOVES TO CALGARY