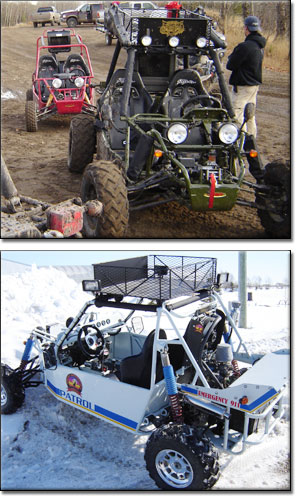 Team Joyner International is relatively new company formed in 2003, with it corporate Office in Tempe, Arizona where all the vehicles are designed, engineered and tested. The vehicles and their parts for the North American market are distributed from this location so we are able to receive parts with overnight service.

The manufacturing facility is located in China with many of the components of these vehicles coming from many other countries.

With the variety of engine sizes, 150cc to 2.0L and their options there is a Joyner vehicle suitable for everyone’s needs.

The motors are made by three different companies. The smaller engines with centrifugal clutches are manufactured in China by the CFMoto Group, who since 1989 has perfected the single cylinder water cooled 4 valve engines to International standards. They are currently exporting motors, mopeds, motorcycles and 4X4 Quads with motors up to the size of 500cc to numerous countries including Canada and the United States.

Some of the motors are being built by Isuzu, a Japanese based company who have been in business since 1937 and are now the leaders in producing low pollution engines reducing harmful emissions.

Some of the larger motors, some with double overhead cam shafts, are being produced by the Chery Chinese Automobile Manufacturer. This 10 year old Japanese run factory uses Austrian Engineers and Italian designers and automobile parts made in many other countries. This company is the largest auto manufacturing company in China and on July 15, 2007 signed a deal with the Chrysler to manufacture cars that will be sold in Canada and the United States by 2010.

The Joyner All Terrain Vehicles bring you trend setting, cutting edge technology and engineering unrivaled by any other products. All vehicles 650cc and up are totally gear driven eliminating costly and time consuming down time. These motors are tough enough to accommodate an after market turbo kit that is available and well as numerous other options. They also come with a true posi rear drive elevating their high level of off road performance in extreme rough terrain and muddy conditions.

The Joyner engineers had the corporate market place in mind when they built the two and four seat Commando, Renegade and Trooper 4X4 Sport Utility Vehicles. These vehicles come with full enclosures and because of the engineering may be fitted with mud or swamp tracks. These vehicles are currently being used by Oil and Mining Operations and has peaked an interest by the Forestry and Motto-cross Industries.

A four and half year extended warranty on all parts and labor may also be attained.
Tundra Motorsports based in Winnipeg Manitoba is the exclusive Canadian Distributor for Team Joyner International products. Buying your off road Sport or Utility vehicle through Team Joyner Canada will give you peace of mind because of the time, effort and money invested over the years by Team Joyner International. This company has focused their effort on instilling a mentally based on the premise that quality comes first. The philosophy and mission of both Team Joyner Canada and Tundra Motor Sports is to have their efforts far exceed their customer’s expectations.

Even though the quality and engineering on these vehicles have far surpassed those of the big box stores the pricing has remained relatively low in comparison. Suggested retail on the side by side 650cc 4X4 Commando Sport Utility Vehicle with winch and alloy rims that are standard is only $12,495.00.

All vehicles come in a rainbow of colors and are powder coated. They are equipped with full light packages including extra driving lights for safety. The 650cc and up vehicles come standard with alloy rims and full gauge packages. Many of the models come with nerf bars and roof cargo racks. Some come with AM/FM CD players and 2500 to 3500 lb. winches. Their dual hydraulic four wheel disk breaking system, rack and pinion steering, gear driven standard transmissions, and inch and half tubular frame and roll bar construction make these vehicles leaders in the industry.