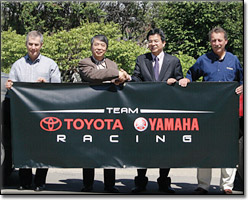 Yamaha Motor Canada is pleased to announce that Toyota Canada Inc. has signed on as title sponsor of their motocross, road and ATV factory racing teams.

The agreement is the latest chapter in a successful relationship between two industry leaders that spans over 40 years and comes on the heels of a recent project that saw the introduction of a 2006 Toyota Tundra TRD Yamaha Edition.

“We have worked hard the last few years to develop promotional opportunities that would benefit both organizations,” comments Tim Kennedy, National Marketing Manager for Yamaha Motor Canada. “Both Toyota and Yamaha have storied racing traditions, so it made sense to form a strategic partnership in this area. This sponsorship is a great way for Toyota to speak to a new audience, show their commitment and expose their brand to fans of the sport.”

Peter Swanton, National Sales Manager for Yamaha Motor Canada, commented, “This is a big help for our race teams. To be at the top in racing requires a tremendous amount of resources each year. This commitment from Toyota will bolster our efforts for 2006.”

“Toyota has always had an excellent relationship with Yamaha, so we are pleased to extend that even further by being the premier title sponsor of the Yamaha factory racing teams,” said Tony Wearing, Managing Director of Toyota Canada Inc. “This partnership is very fitting because the combination of Toyota and Yamaha brings together many of the world’s very best vehicles, whether on two or four wheels. We look forward to a full and exciting race season with Yamaha this year.”