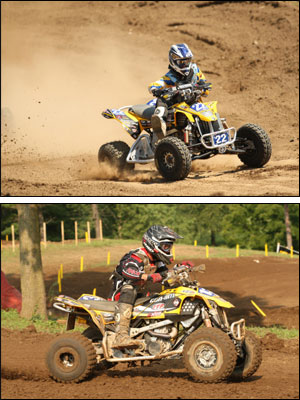 John also made a hard charge to come away with third place in the second moto, bringing him within striking distance of a top five finish in the 2008 season’s points race.

Natalie got off to a bit of a slow start in moto one due to his clutch slipping, but he soon began to pick off riders one by one to break into the top ten. I had kind of a rough start, but I stayed with it and worked my way up, said John.

By the final lap, Natalie had worked his way up to seventh and held that position all the way to the finish line. In moto two, things were a little different for the Warnert Can-Am DS 450 racer.

Natalie shot off the line with amazing speed, taking third in the holeshot behind Keith Little and Joe Byrd. Despite the track becoming rough and rutted, Natalie took no time in picking off Little to take over second place.

Natalie held his second place position for several laps before falling back to third, but Natalie had no intensions of giving up another spot, even when Josh Creamer was on his grab bar pressuring him for third. I felt pretty good out there today, the bike was running strong, said Natalie, who finished in fourth place overall.

Warnert Racing’s Cody Miller was looking good on the track and was laying down some impressive lap times, but a string of bad luck deterred him from a top ten finish.

Miller got off to a mediocre start in moto one, but he made an impressive charge all the way up to ninth place by lap three. Unfortunately, Miller ended up losing a valve stem and began to drop back.

My front tire went flat and I tried to ride it out, but I ended up having to make a pit stop to change it, which put me back to 18th, said Miller.

In moto two, Cody came off the line mid pack, but got hit and spun out in the first turn, which also resulted in him getting stuck on a hay bale. Miller’s hang up put him back into last place, but Miller worked himself up to 15th. I’m definitely looking forward to Loretta’s. I usually do well there, and I can’t wait to see the changes that have been made to the track, said Miller enthusiastically.

The final round of the AMA ATV Motocross Nationals will bring the Warnert team to the legendary Loretta Lynn’s Ranch in Hurricane Mills, TN on August 10th, where Cody Miller hopes for a top five finish, and John Natalie plans to end the season on a high note by putting his Can-Am DS 450 on the top spot of the podium.

Dirt Trax Onlinehttps://atvmag.com
Check back frequently for new content and follow us on social media!
Previous articleOutlaw 450MXR Finds Home in the Top Ten!
Next articleArctic Cat is Title Sponsor for Danny Lasoski