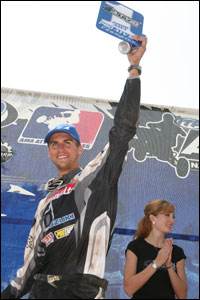 “This is great,” an excited Wimmer said after securing his first major championship. “I’m happy to be able to deliver this title for my fans, Suzuki and for our sponsors. All the hard work paid off and it feels really good.”

The Suzuki QuadRacer R450-mounted Wimmer (#191) demonstrated the speed that has put him at the top of the points chart this season as he took home another Top Qualifier award. As the first moto began, however, Wimmer wisely opted to take it easy and secure the championship.

Meanwhile, teammate Chad Wienen took over at the front of the pack and set a furious pace. Wienen maintained his pace to the checkered flag while veteran teammate Gust rounded out the podium in third. Wimmer would cross the line in fourth, good enough to secure the championship.

Wienen went on to end the day in second overall with a 1-2 finish. Gust joined his teammate on the podium with a third overall (3-5), while newly crowned champion Wimmer finished the day in fifth (4-6).

Wimmer was jubilant after the first moto. “This has been a great season. I just went out there and rode safely. My Suzuki team members deserve most of the credit. My bike has been just perfect all year, and that’s how you win championships.” Wimmer’s mechanic, Glen Schulde received the “Mechanic of the Race Award.”

“We’ve worked really hard for this and it just doesn’t get any better,” Team Manager Kory Ellis explained. “It was a perfect combination this year – the bike, the riders, the mechanics and all the support we get from our sponsors just all came together.”

The championship is extra sweet for Suzuki as they are celebrating their 25th Anniversary of being “First on Four Wheels.” Suzuki continues to dominate the Manufacturers’ Cup.

Other Suzuki Winners at Red Bud include:

Congratulations everyone. The final round of the 2008 Moose Racing/ITP Tires AMA/ATVA National Championship takes place August 9-10 in Hurricane Mills, Tn.