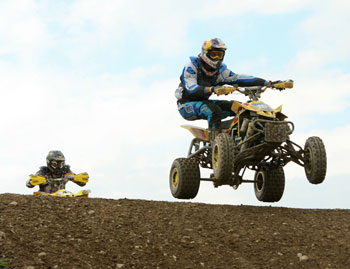 For the last six years, ATV enthusiasts gather at Mapleshade MX in Sugar Grove, Pennsylvania to race in memory of Matt Bartosek, the talented up and coming pro who died in early 2003.

The quad was signed by the entire Rockstar / MSR / Pro Taper / Yoshimura / Suzuki team. Proceeds went to the 88 Live to Ride Foundation and the Mobile Medical Unit.

The fans that turned out in support of this year’s event were treated to some real world-class racing. Recently crowned ITP Tires/Moose Racing AMA/ATVA National Motocross Champion Dustin Wimmer and his Rockstar / MSR / Pro Taper / Yoshimura / Suzuki teammate Chad Wienen showed up for Sunday’s race in the Team Rig along with a Who’s Who among national pro riders.

The action on the track was an exciting duel between the two Suzuki riders – especially for the second moto. It was nonstop action with Wimmer shadowing Wienen for the majority of the race, and then swapping places in the waning laps.

On the last lap, Wimmer found a better line and passed his teammate with only two turns left before the checkers.

“That moto was the best race I’ve ever run in my life,” Wimmer explained. “I got onto Wienen on lap 2 and stayed second until the last lap. I got a good drive uphill over a triple and got around him in the second-to-last turn. What a great race! Debi put on a great event here and we all had a lot of fun.”

Everyone enjoyed the weekend. It was a wonderful way to end a great season of ATV racing with some great riding, a lot of fun activities and over $12,000 raised to help support the event and 88 Live to Ride.