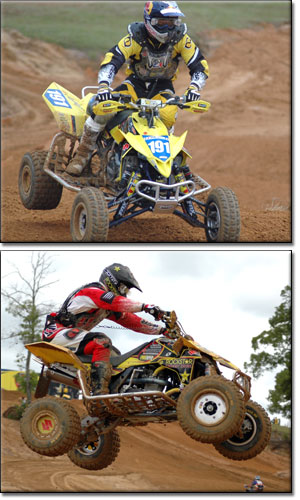 Dustin Wimmer braved the cold wind and rough track busting out the first ATVA National overall win of his young career and his first win for Team MSR/Pro Taper/Suzuki/Yoshimura.

A heavy rainstorm moved through South Georgia on Saturday night raising fears that the track would be washed out. Sunday dawned cold and overcast but the sand base of the track made for a raceable surface.

Moto one saw a Suzuki One – Two – Three sweep into the first turn. Dustin Wimmer snagged the holeshot with teammate “Digger” Doug Gust hot on his heels in second, and Suzuki support rider and rookie Pro Russell Shumaker in third.

Wimmer was smooth and fast around the elevation changes of Echeconnee, pulling away to a commanding lead by moto end. Digger Doug had an up and down race but managed to pull off second.

“The Suzuki was really working for me today,” an excited Wimmer said after the race. I’m really good in the mud, but it wasn’t all that muddy out there, they really cleaned up the track. I had good lines and was able to stay out in front.”

“We are all really proud of Dustin today,” Suzuki’s Rod Lopusnak happily said. “We all knew he could do it and it was really great to see him get his first ATVA win on a QuadRacer® 450.”

Doug Gust also ran a good race dicing with Lawson in a few places, but was able to cross the line in second place. “This is one of my favorite tracks,” Digger Doug said. “I pulled two good starts and was really happy about that. The Rockstar/MSR/Pro Taper/Suzuki/Yoshimura QuadRacer 450 was really awesome getting off the line.”

Moto two saw lots of ruts but a pretty raceable track surface. There were a lot of rollers and stutter bumps leading up to most of the jumps. Two-track ruts also made precision a key.

Once again when the gate dropped Wimmer holeshot with Doug right behind him in second. Wimmer blistered the track surface and pulled out a slight advantage by the end of the lap. Doug picked a few outside lines on lap one to avoid Wimmer’s roost and ended up stuck in some very deep and soft dirt. His momentum gone, Doug lost three spots in just a few seconds. Once back under way- Digger was on the prowl looking to get back up front.

“I took a bad line because I thought it looked smoother to the outside,” Digger said. “And it was like driving into quick-sand. By the time I got through it, three guys went by me like I was tied to a post…I was pretty mad at myself.”

Meanwhile back up front, Wimmer lead for the first five laps. Joe Byrd pushed by a few laps form the end but Dustin knew he wouldn’t factor into the overall as Joe had only a 4th place in the first moto. Dustin crossed the checkers in 2nd grabbing his first overall win and pumping his fists in the air.

“My Suzuki QuadRacer 450 is so fast. Doug and I ruined those other guys on the starts today,” an elated Wimmer said after the race. “Both motos, I just set a fast pace and let my bike do the rest. About halfway through the second moto I knew I had it… it was a really good feeling.”

In addition to the Double D’s machines, Suzuki was the brand of choice with the majority of bikes in the pro class and four of the top ten with Russell Schumaker, Jason Dunkelberger, Joe Haavisto and others campaigning QuadRacer 450s.

Yoshimura’s Brant Russell summed it up this way, “The Suzuki QuadRacer 450s really shine on technical tracks. The power delivery, the frame geometry, and overall quality of these machines are at a very high level. What is really gratifying, is that Dustin and Doug’s quads are probably the least modified of any of the Pro Class bikes.”

The team will stay in Georgia to do some more testing and training. Team Manager Pat Alexander explains, “The bikes are really dialed in right now and running really well. But there is always some tweaking to do. We’re going to be ready for some real racing in two weeks time at the first WPSA event at Silver Dollar.”