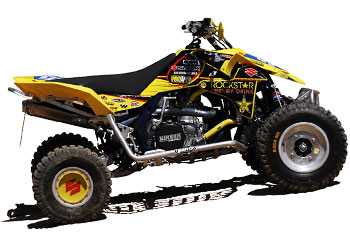 How have they entered, you ask? They simply predicted the top three SuperQuad Pro 450 finishers from any round of the 2007 WPSA Powersports ATV Tour all for free.

“This Fantasy ATV Racing thing is awesome! I can’t believe ATV racing has something this cool, it’s better than a NASCAR contest,” says round two winner, Tyler Hutcherson of Mocksville, NC. Tyler already won a complete Yoshimura exhaust system for his ATV and is entered in the drawing for the grand prize, a Suzuki LT-R450 Doug Gust Replica!

As we approach the final chance to win the grand prize, only 60 people have predicted the exact podium from any of the previous 11 rounds. “With a one-in-60 chance of winning the Suzuki, this is a no-brainer, you need to do yourself a favor and enter your predictions right now,” said ATV Scene.com’s John Pellan, co-promoter of the all-new Fantasy ATV Racing.com contest.

If indeed you nail the exact podium order for round 12 at Field of Dreams MX Sept 15-16 in Pennsylvania, be prepared win yourself a new Suzuki LT-R Sunday evening when American Suzuki’s Rod Lopusnak draws the winning entry during the WPSA Season Ending Awards Banquet at the event.

“Suzuki is really excited about being involved with this fun, interactive program,” said Rod Lopusnak, American Suzuki Motor Corp. vice president of operations. “It has linked people with quads in general and racing in particular. With this contest, anyone can play and experience the thrill of ATV riding and racing. It’s great.”
“This is an exciting contest and allows fans the unique chance to get up close and personal with the PowerSports ATV Tour and its riders,” said PowerSports Entertainment, Inc. CEO Rick Murphy. “The grand prize is just awesome, and with odds like this, fans should be clamoring for a spot in the drawing.”

The Grand Prize Suzuki LT-R450 is no ordinary ATV. Thanks to Team MSR/ Pro Taper/Suzuki/Yoshimura (Energized by Rockstar), the Suzuki QuadRacer R450 is equipped with the same race-winning accessories and modifications that Doug Gust used to win the 2006 WPSA Championship, including more than $6,000 worth of engine modifications from Yoshimura.
“The program has been an overwhelming success and we’re glad to be a part of such a cutting edge opportunity. The sponsors have gone above and beyond to provide prizes that are nothing short of amazing. No other contest, period, actually provides prizes that are pro-level. So far we have given away thousands of dollars in race parts, and the best is yet to come.” – Brit Mansell, owner of Isoaxis Creative Consulting, creator of the Fantasy ATV Racing.com site.

Whoever earns the most points during the season will be crowned Fantasy ATV Racing Champ and win a complete Yoshimura racing engine (for any make) with an approximate retail value $2,500!