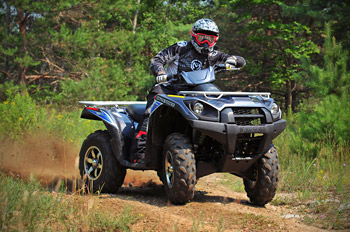 Its that time of year when our inboxes our flooded with invites for the next model year introductions and one were particularly curious about for 2015 is what Kawasaki has up its sleeve.

Last season Kawi wowed us with a new-from-the-ground-up Teryx 2-seater based on the 4-seater frame and absolutely jammed with enough goodies to make you giggle. The biggest surprise was the new 783cc mill that produced serious power at the press of the accelerator.

We still have to wonder whether Kawasaki will stuff this same engine into a revamped Brute Force for 2015 and would we see some of the trick features present on the Teryx show up on the BF as well.

Along with an upgrade in power to the 783cc V-twin, how about similar Fox clickers as the Teryx with perhaps a slightly softer spring calibration. Weve found the springs on the BF to be set a bit too stiff resulting in too much rebound. We think a slightly softer stock spring along with the adjustability of 24-setting gas cell clickers significantly smooth out ruts and trail chatter.

We think theres also room to upgrade the seat to a slightly different foam configuration that molds to the riders natural seated position and perhaps the sweet looking two-toned design found on the seats of the Teryx.

Another biggie is storage. We absolutely love the composite racks on the Sportsman XP and Outlander models and think a move away from the tubular steel design would put Kawasaki out in front of other Japanese manufacturers in this area.

Composite racks would also allow engineers to offer sweet under-rack watertight storage. The deep wells found on the 2014 Teryx were a huge hit and an ingenious storage solution. We feel the Brute Force has potential to impress us here.

We also think it might be time for a move away from the lever actuated differential locker to an electric push button diff locker like the one found on the Grizzly. With all the available technology Kawasaki has at its fingertips were confounded that this manual lever is still available.

At this point we have no real indication what Kawasaki actually has in store, but coming off a strong 2014 model year, we suspect to be pleasantly surprised by what we see.

Mike Lester
Mike Lester is Staff Photographer and Digital Content Manager for Dirt Trax TV. He is also a Contributing Editor and Guest Correspondent on the show.
Previous articleCAN-AM’S 2015 6×6 MIGHT JUST CHANGE THE RULES
Next articleWHAT’S THE PLAN, SUZUKI?