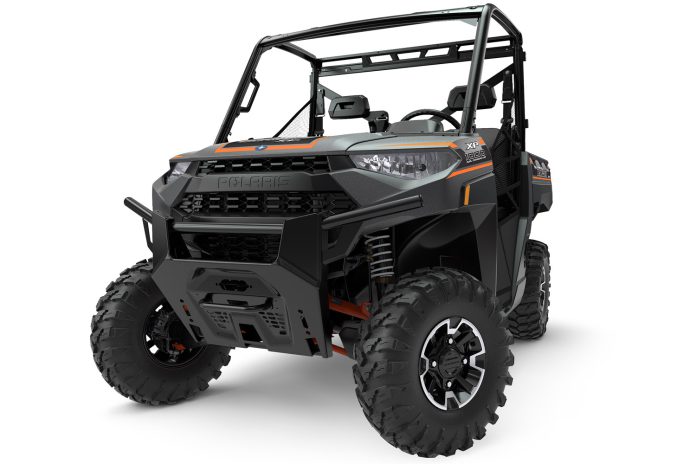 It’s hard to believe it’s been five years since the current Ranger XP was introduced. Incredibly, Ranger sales are approaching the one million-unit mark and that is a milestone in any companys history.

Here’s the problem: Trying to improve on something so popular is no small undertaking. Certainly, over the last few years the competition has been benchmarking the Ranger and building new products to attempt to unseat it as the industry leader – and there has been some success in doing just that.

Polaris took the wise route and polled Ranger owners to learn what could be improved on a second generation XP. The result was over 100 improvements to the original.

Dimensionally, the new XP has a wider stance and sits one inch taller than before, to deliver 13-inches of ground clearance. Owners said more protection was needed at the front so the engineers developed a huge and very stylish front bumper/brush guard that protects not only the bodywork but the winch and other front components. Separate A-arm guards have been beefed up from before.

Integrated into the new bumper is a shroud for mounting a plug-in Polaris winch – and this leads to one of Polaris’ latest innovations: A “bus bar” located under the front hood area with slots for simply plugging accessory jacks into.

All you have to do is run the wires up to the bus bar and plug the pre-made jack for the lighting, winch, sound system or whatever into it. No wires to peel or connectors to mess with. So easy-peezy!

On the dash on the left side of the steering wheel, Polaris has added cut-outs for accessory switches. Just pop off the covers and secure the switch for the above mentioned goodies and youre instantly in business!

Making these accessories easy to install is sheer genius because it pretty much guarantees owners are going to be shopping the Pure Polaris catalog for stuff first rather than going to the aftermarket.

Out back, Ranger owners felt more heft was needed in the cargo bed. The designers made the bed about an inch deeper and then welded more supports at each corner and built a stronger frame underneath it all.

To handle heavy loading, the tailgate was also made considerably thicker. You’re getting 1000-lbs of cargo capacity back there now.

Changes to the driveline have amped-up durability and smoothness. Although the 1000 twin only makes about two more ponies than before, the CVT has been completely re-thought to deliver a broader range of power. Belt width is the same as the 144-hp 1000 Turbo now and air venting has been opened up for cooler operation.

Ergonomics are huge on work vehicles and the designers felt since owners are spending a lot of hours in the cab, it should be made more spacious and convenient.

First, they added a ton of storage in the dash, both covered and uncovered; more drink holders and even a place for cell phone storage. The footwells were increased in size by a total of five inches to not only give more legroom but to make ingress-egress super-easy. The seats have about one inch deeper foam and carved-in bolsters to provide improved support at the hips.

Polaris couldn’t intro a new vehicle without making handling a priority. Although the same basic double A-arm layout is used, turning radius has been cut down by 13-percent and there’s less turns of the steering wheel to go lock-to-lock. Even the in-cab steering wheel angle is different to allow more leverage at the wheel and better comfort with less fatigue for the driver.

One glance at the new XP leaves little doubt its design was influenced by Can-Am’s Defender. The snub-nosed front end and sculpted body-lines are a dead giveaway the Ranger is a salvo targeted at any market gains the Defender could possibly be gaining.

Competition is good and it raises the bar for anyone else bringing new equipment to market. As it is, the new Ranger XP is good enough to sell its second million.