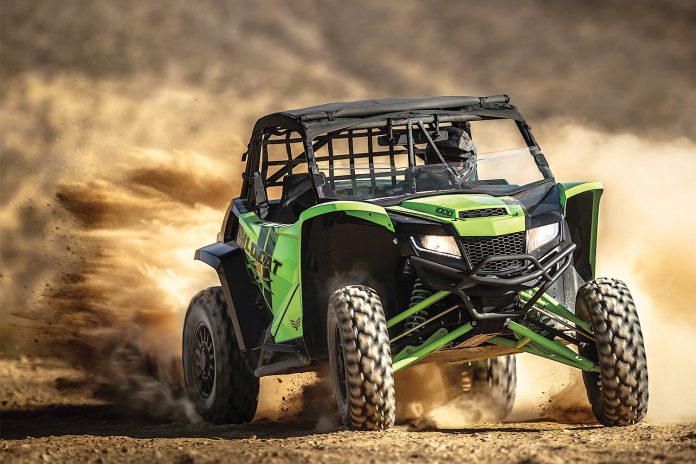 Putting Robby on this project netted much more than just having a famous celebrity endorsing a new product. This guy is extremely hands-on and when he says it’s good, he means he has tested it to the absolute extreme, made suggestions and pushed hard for them being carried out.

Just a side note: Talking to Luke Lester, who himself is a formidable off-road rider and stunt driver for our cameras, he related his experience with Robby Gordon while on a first-ever test ride of the XX.

In two sentences: “I have never gone that fast over such incredibly rough terrain at any time in my life. Not only was I white-knuckling it but I couldn’t believe how cool and at ease Gordon was riding at those speeds!”

Needless to say, any new vehicle that can pass the RG test, has got to be solid. RG is the moniker Textron uses to describe the Wildcat XX’s suspension system and naturally, RG stands for Robby Gordon.

Technically, Textron is using an unequal length A-arm front end. This tech is common in the snowmobile industry because it allows the suspension to cycle through its full travel, in this case 18-inches without altering the vehicle’s stance side-to-side.

This term is called “scrub” and when the upper and lower A-arms are the same length with the center mounting points directly above one another, makes the vehicle less stable and prone to bump steer which takes the vehicle off-course. The result is vague steering under extreme conditions as the stance changes throughout its travel.

The XX’s unequal length arms, with the upper and lower control arm mounts staggered, keep the wheels the same length apart all the way through the suspension travel and it means it tracks near-perfectly in corners and on high-speed straightaways. On landings, when all the travel is used up, the Wildcat lands straight every time.

Textron has gone with top drawer Fox 2.5 Podium QS3, 3-position compression adjustable gas shocks on all four wheels. There’s only three settings: Soft, Medium and Firm, so its super-easy to set up your level of compliance and get all four shocks set exactly the way you want them.

Robby is quick to point out that although this front end design is excellent there’s more required in an off-road vehicle at this level. Durability is key and races are never won without it.

Thus, the engineers have specified suspension parts be built in double shear, meaning the force required to shear the bolt, coupler, tie rod end, steering knuckle or ball joint in double shear is twice the shear force required in single shear since there are two shear planes (the total shear area is doubled).

Depending on the materials used for these parts there is a weight penalty, but, ask any off-road racer and theyll tell you this is the best possible scenario. After riding with Robby, we believe it!